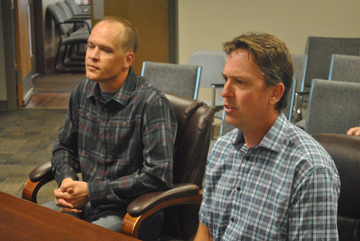 Commentator/Courier photo by Jeremy Appel Joel Heese and Blaine Fairbrother of the 670 Collective Mountain Bike Club spoke to Redcliff town council at its June 11 meeting about expanding its current network of trails in town.

Medicine Hat’s 670 Collective Mountain Bike Club is looking to expand its Redcliff trail by at least three kilometres.
Trail committee members Blaine Fairbrother and Joel Heese brought their proposal to Redcliff town council’s June 11 meeting.
The club needs the town’s permission to start building, as the land it seeks is currently under an agriculture and grazing lease by the town.
The 670 Collective is looking for an exclusion of grazing animals from its trail building areas, according to a letter sent to town administration by club president Kurtis Peters.
“The nice thing about this area is it gives us a chance to connect the skills park to existing trail network that’s down below there,” said Fairbrother. “It makes a real nice corridor.”
There is an additional three-to-four km to the west that the club wants to incorporate into its trail, but it’s owned by the provincial government, so it requires their permission.
Heese said there’s enough trail within the town to request council’s approval even if the club doesn’t get approved for the provincial lands.
“It’s an interesting regulatory situation, where we have provincial lands nested within the town boundaries,” he said. “While we have an intended overall layout … we’re still interested in Redcliff lands. We’d essentially treat that as Phase 1 while we still sort through the challenges with the provincial land.”
Fairbrother said the new trail will be built to anyone who can ride a bike can use it.
“The majority of this will be a beginner-level trail,” said Fairbrother. “It’s something right now that’s lacking with the Town of Redcliff.
“We have beginner trail in Medicine Hat with the Burnside trail, but in Redcliff, because of the terrain that we did by the river, it really didn’t lend itself to be more beginner friendly.”
The Mr. Burnside trail connects Medicine Hat and Redcliff through single-track natural trails, but Peters said in his letter that “we have seen a dramatic increase of visitors from outside our region coming with the intention of riding Redcliff” in the past two years.
Fairbrother said the club has more than 100 people use the trails each week, an estimate he called “conservative.”
“(It) exceeded our expectations,” he said.
“We’ve got a reputation for being a cool place to ride.”
Coun. Eric Solberg spoke highly of the group’s trail system.
“Every standard that you guys have met I appreciate and as long as you guys maintain that same standard going forward, I’m all for it,” said Solberg.
Council voted unanimously for a motion put forward by Coun. Larry Leipert to accept the presentation as information.