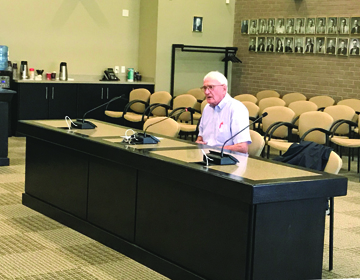 Dr. Ken Sauer of the Medicine Hat and District Track and Field Society visited Cypress County council to give an overview of the Rotary Track Soccer Complex revitalization project that has been in the making for five years in hopes of gaining financial support at the county’s July 3 meeting.
The $636,000 project that is attached to Crescent Heights High School was expected to break ground last week, after the county approved to pitch in the remaining $23,000 needed to get construction started, according to Sauer.
A 50×30 track and field society administration building will be built at the south end where administration offices will be housed along equipment storage, a high jump pit and a first-aid room.
A soccer complex will be added to the current building near the concessions on the north end for change rooms and a shower facilities for officials.
“This is for officials that come into town and officiate,” said Sauer.
“They’ve been really concerned over the years that there’s no place for them to change and shower after they do the refereeing.”
The Medicine Hat Rotary Track sees 5,000 young people from the city and area per year according to Sauer but the problem lies with the garage door at the south end that stores the track and field equipment on shelves, having limited capacity and became a busy area.
He added that there is around 100 to 150 volunteers who help at events and set up their tent and the wind would blow them over.
The City of Medicine Hat chipped in $325,000 last year, the School District #76 Education Foundation supplied $18,000, the Catholic Board of Education $7,000, the Medicine Hat and District Track and Field Society gave $20,000, while a grant was requested from the Community Facility Enhancement program for $268,262 resulted in the government providing $150,000. The project was short $118,000.
However, SD # 76 mowed under the bleachers and the $18,000 was taken off the costs, while the track and field society was able to get a grant through the Community Foundations of Southeastern Alberta for $8,000, while the track and field society and SD #76 pitched in another $20,000 each.
“I’ve been out there throwing my body across the table (for contributions),” said Sauer.
“I’m sore but going to continue because to me this is going to be the facility that it’s already a big facility and people are coming from across to participate and love to come here.”
The city provided the financial arrangements for the project will not have to pay the GST and that $30,000 will go towards the revitalization of the complex and $78,000 was the total before Sauer came before county council for the $23,000.
Coun. Dustin Vossler moved for Cypress County to give $23,000 out of the cash in lieu fund. Council approved.
Nov. 1 is the anticipated completion date.