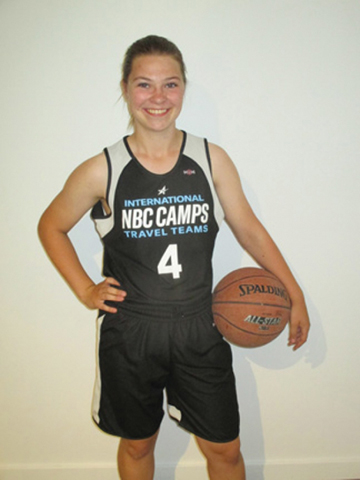 Fifteen-year-old Morgan Brower has just returned from an exciting trip to the United Kingdom, where she got to take part in one of her passions – playing basketball. The opportunity came after she took part in another basketball camp a little closer to home.
Last year, the Aden-area girl attended an NBC basketball camp at Olds, where her hard work and sportsmanship paid off and she was chosen All-Star. That led to her receiving a letter in the fall, inviting her to participate on the NBC International basketball team, that includes elite players from across North America. Players are selected for this team based on their outstanding athletic ability, as well as their strong character.
NBC Camps was started in Cusick, Washington in 1971 as a place where young people could develop their skills while focused on encouragement, self-discipline, and gratitude. Participants in the basketball camps learn how to become a better shooter, improve their offensive moves, work on handling skills, have a better overall understanding of basketball, and become a stronger leader.
The Aden-native said she was excited, but not nervous about playing with and against some of the best players in the game from North America and the United Kingdom and wrote a synopsis of her trip for the Prairie Post.
In her words:
“I was selected to play basketball on the NBC 2018 International traveling team, in the UK. I left on June 28 from Calgary to Seattle where I attended a day training camp. Here I met my 12 other teammates and my coaches. The team consisted of girls from all over North America. We had team practices and bonding etc. until 10 pm, then slept a little and boarded a plane to the UK at 3 am the next morning.
From Seattle we flew into Manchester, this was a nine hour flight. Upon arrival, we transferred by coach bus to Blackpool. We had a tour guide named Shawn he was from the UK, which made him a very handy tour guide. I don’t know if we would have been able to navigate and figure out where we needed to be without him. Shawn made a great cheerleader for our games and he was funny too!
Once we got there we played 3-vs-3 and met our homestay (These were the families in the area we would be staying with for three days, two girls per house.) We played basketball in Blackpool and on our last day we went to Pleasure Beach, which is an Amusement Park. After spending three days, we moved on to Liverpool. Here we stayed in a hotel for three days. We played some really good teams and were able to do more sightseeing, which included the Chester Castle/Cathedral museum, and Loughborough University.
We then moved on to London playing some more basketball and touring London. We rode on a double-decker bus, a Boat Ride, seen the Big Ben which was under construction till 2022, the Tower of London, Buckingham Palace, and the M&M chocolate factory, to list a few.
This was a great opportunity and I am so blessed that I was selected to play the game I love and be able to go. We played some very good ball, we got the privilege of playing against a national championship team, and some more experienced teams/players. The opportunity to play with other players is always a great experience. I believe that it teaches you to become a better team player which helps you become a more rounded player. My coaches were impressed with my ability to rebound and my defence along with my quick hands and feet. I was able to make steals and break away lay ups. I will never forget this experience and the lifelong friendships I have made.”