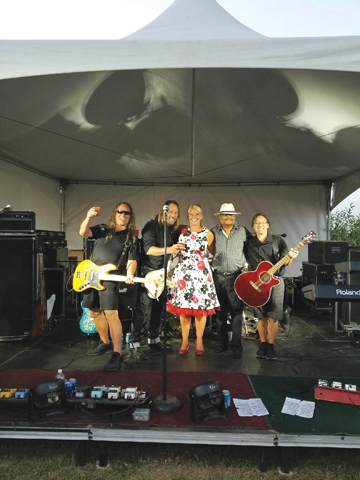 Erna Varekamp poses for a picture with The Chavalle, which handles the entertainment for the 10th anniversary party on Saturday

By Scott Schmidt
Southern Alberta Newspapers
A lot has happened since 2001 when Erna Varekamp first moved to Canada from her native country of Holland.
What began as a work permit and a job on a potato farm near Burdett, eventually became marriage, family and not one, but two growing businesses.
Varekamp owns and operates Erna’s Berry Farm and Country Cafe, five kilometres west of Bow Island, as well as — at least for now — the Rolling Pin Bakery and Cafe in the town’s site. She’s had the bakery for just four years, winning a small business award in 2016, but is actually looking to sell in order to focus on her passion, Erna’s Berry Farm.
“I’m hoping that when the bakery does sell, we can expand here at the berry farm,” Varekamp said. “I started out opening (the berry farm) in May and closing in October … but because of the bakery, we are now opening in June, and I’m closed by the first week of September already.”
Willing to do what is necessary in the moment, Varekamp originally bought the bakery in order to help the berry farm expand, and is now looking to sell it for the exact same reason.
“My dream is to put a bunch of cabins up here, and rent them out in the summertime, spring and fall,” she said. “It’s a very nice setup — it’s surrounded here by trees and bushes, so it’s private as well.”
The berry farm wasn’t much when she bought it — even going an entire year without crops because of a devastating storm. But savvy saving and hard work eventually afforded her the brick and mortar, which houses not only the farm’s retail but also the Country Cafe, a small restaurant infused with the very flavours growing outside.
“Each time I built up some money, I could put more into the berry farm,” she said. “And so it kind of grew, and grew — that’s kind of how we got to today. You can build up your reputation that way.”
‘Today’ just happens to be part of the berry farm’s 10th anniversary year, and she threw quite a party this past weekend to celebrate.
Southern Alberta’s own The Chevelles entertained a crowd of more than 100, while Varekamp raced around making sure partygoers were taken care of with dinner and drinks.
“It was a very good turnout,” Varekamp said. “We had about 150 people for supper, so that was really nice. I was quite nervous — didn’t know what to expect or how many people would show up, but it went well.”
The crowd arrived at 6 p.m., while a determined Varekamp motored in order to get dinner going by 7 p.m. and the band at 8.
“We ran a little behind but it all turned out good. So many people were saying we should make this an annual thing — it was nice.”
And maybe even appropriate, as hard work and a little bit of scrambling are very much the story of the business’s first decade.
“It’s been quite the ride,” she says. “But it’s been a good 10 years. I didn’t really even know what I was doing (when I started), but it’s gone well. I never expected it to be this big.
“I started out with nothing out here, and if I look at how much it has expanded over the last couple years, it’s been a lot of hard work, but you can look back and say, ‘Ha! I managed to do all this.’”