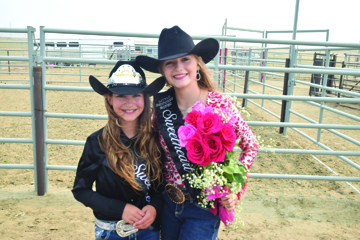 The 2018 Little Britches Sweetheart Rodeo Queen was crowned at the Dunmore Equestrian Centre on Saturday, with 2017 Sweetheart Evie Neubauer passing the torch onto Tenley Warburton.
Warburton, 12, who lives near Hanna but originally hails from Medicine Hat, says she’s carrying on a family tradition by participating in rodeo.
This isn’t her first time participating in the Little Britches Sweetheart competition, having been part of last year’s competition at the urging of Miss Rodeo Canada Brittney Chomistek, whom Warburton considers a mentor.
“I’m hoping when I get older I can try out for Medicine Hat Rodeo Queen and Miss Rodeo Canada,” said Warburton.
She gave special mention to her fellow contestants, who she said all performed well this year.
“I’m sure the tallies were really, really close between all of us, because all contestants did such a great job. I just can’t wait for the year and what journeys lie ahead.”
The Saturday morning portion of the contest included an equitation test, where the judge gives each girl different commands, horsemanship patterns, which were provided to them beforehand, and a presentation ride, which is similar to an introduction at a rodeo.
Friday evening was the speaking portion, where each girl did a three-to-four minute speech followed by an impromptu question-and-answer session.
Although Chomistek typically organizes this year’s event, she’s busy with her duties as Miss Rodeo Canada, so her mother Shelley, a former Miss Rodeo Canada herself, took the reins this year.
Medicine Hat Rodeo Queen Haley Schlenker and Princess Abby Perrett also stepped up to the plate to ensure this year’s competition could take place.
“They have the experience of being recent queens, bringing their knowledge and also a lot of guidance to these young ladies,” said Shelley.
The four other participants this year were Julianne Curran, Ridley Elliot, Charlatan Sandford and Denae Schafer.
Schlenker said she has high hopes for each of this year’s cowgirls.
“We want them to just learn and grow and develop,” she said. “That’s what this competition is all about.”