Riverview Golf Club must play out of financial hole 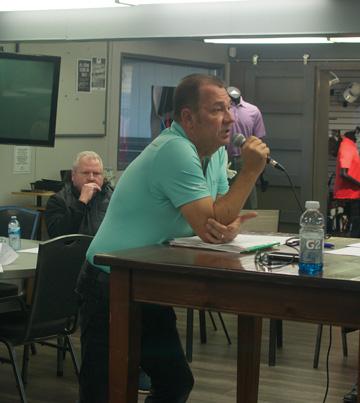 A packed clubhouse of more than 130 people at an emergency meeting on Oct. 11 in Redcliff heard of a serious financial burden hanging over the Riverview Golf Club.
Course members and town ratepayers listened as member Richard Lant discussed how the club has accumulated a debt of $405,000, which it has been struggling to pay.
“It’s something that has been building for a lot of years and we can’t satisfy the short-term debt,” said Lant.
“We haven’t had the money moving forward to replace equipment. We’re leasing equipment and those costs are climbing. But we’re in the 21st century and have to go back and do things in a different way. We’ve got to get rid of that debt and start on the ground floor.”
The debt has been rising for 10 years, he said, and the course has had to take action starting in 2018.
“It’s been difficult,” he said.
The golf club saved some money over the past couple years by cutting staff and budgets for grounds crew and equipment.
Club members and town taxpayers were asked to help deal with the debt by paying a one-time fee of $500 to help start paying off the debt. Lant said the goal of the $500 payments would be $100,000.
Lant said a business management plan is in the works.
Longtime member Kelly Booker said he firmly believes the golf course is vital to the community.
“It’s a great relaxer and it’s one of the few things the Town of Redcliff actually has where people can come out and enjoy themselves. We just need continued support to keep it operating.”
Booker contributed in a big way by donating $5,000 out of his own pocket toward helping others who could not afford the $500 fee.
Town of Redcliff Mayor Dwight Kilpatrick, who attended the meeting, said “it’s encouraging … to see members willing to participate and willing to keep the club going.”
The club is a non-profit organization run by a committee of golf course members, and the town’s only involvement is leasing the land.
But the town will only get involved when a viable business plan is put together, the mayor said.
“For us to buy in and try to help them out, we need to see that they have a plan,” he said. “Otherwise it’s not a good investment.”
People were lined up to sign up for the $500 proposal at the end of the night’s proceedings.
The club had 460 members as recently as six years ago. That number has dwindled every year since to the point where it was 237 by the end of the 2018 season.