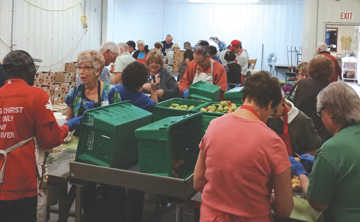 SUBMITTED PHOTOS JAMES SMITH Volunteers work with locally-grown produce at the Prairie Gleaners location in Cypress County. The organization is quickly approaching its 10th birthday and has grown to process, bag, box and ship 5 million servings of food to countries in need each year. The group's 10th birthday is in June.

When disaster strikes anywhere around the globe — there’s a good chance the Prairie Gleaners Society is doing its part to help out.
The group started as just a small idea nine-and-a-half years ago and has blossomed into a not-for-profit organization that has helped feed millions worldwide — all while using locally-grown produce that isn’t fit store shelves.
“When we started out almost 10 years ago we were thinking about all of the food that was lost that didn’t make it into stores,” said board president James Smith. “When we started it did start small but we quickly saw a need — it just took off.
“Some of the greenhouses got on board and we’ve been operating at a pretty high capacity for years.”
The Prairie Gleaners Plant works on a 100 per cent volunteer basis and is now able to turn old, unwanted produce into roughly 5 million** meals to be shipped all over the world.
“We have a couple small trucks that go around to some of the greenhouses that pick up produce that has been set aside for us,” he said. “I think everyone involved is just happy to see the food being put to use and not having it go to waste.
“It’s pretty amazing what we’re able to do with this food.”
After the tomatoes, carrots, potatoes, celery, peppers — to name just a few of the vegetables the group works with — are picked up, dehydrated, packed and boxed. They’re eventually picked up by different world aid organizations during times of need.
“We work with whatever we have at the time and we work to dehydrate and package it into bags that are roughly three pounds,” said Smith. “We add dried beans and lentils to the mixes so it’s a complete, nutritious mix.
“We make this to supplement diets. We don’t always know what people are going to make with it but we know that we’re shipping them good food that will help them in their time of need.”
The Prairie Gleaners box up the bags of food and then wait to be contacted by world aid organizations that want to pick up the food to send it to a country as part of disaster relief programs. The food has made it to roughly 50 countries around the globe.
“In the last few months we’ve had shipments sent to two locations in Africa and in just the last couple weeks we sent some to El Salvador in South America,” he said. “We don’t consistently send food to one or two places — it’s just wherever it is needed at the time.”
A lot of groups, clubs, teams and friend circles from Medicine Hat and its surrounding area make trips to the Prairie Gleaners factory to volunteer for a day — something that makes the whole operation possible, says Smith.
“The volunteers make this happen — they’re essential,” he said. “Without the volunteers, none of the work would be done at all — we’re completely volunteer run.
“People just show up every day. We never know how many it’s going to be but it averages out fairly consistently and we’re about to work through about a tonne-and-a-half of produce in the morning.”
Smith says the group has no plans in stopped any time soon.
“It’s one of those things you wish didn’t have to exist,” he said. “We’re prepared to continue has long as we need to and we’re able to.”