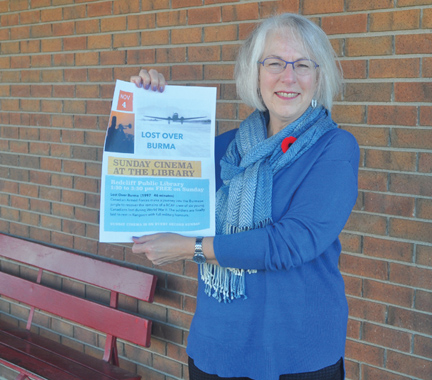 Katherine Rankin showed the film she helped produce, Lost over Burma, on Sunday.

Guests at the Redcliff Public Library’s Sunday Cinema series had the opportunity to experience a mission into the Burmese jungle in the film Lost over Burma: Search for Closure on Nov. 4.
This documentary takes a look at a recovery mission of the Royal Canadian Air Force crew of six young Canadians lost during World War II. Their lives and wartime experiences are recalled through the memories of colleagues and families , who attended the emotional funeral near Rangoon, where the men have been laid to rest with full military honours.
“This film is 21 years old but it’s a timeless kind of topic,” said Redcliff based producer Katherine Rankin, who worked for the National Film Board at the time for the film.
“People disappear and the loved ones left behind don’t stop looking until they get some answers.”
Rankin was contracted out to the National Film Board where she was filling in for a producer who was ill at the time and had the pleasure overseeing the film that took close to two years to complete before it was relased in 1997.
“It took along time to get through the red tape because our military was into a secretive place in Burma,” she said.
“There were only three seats on the transportation that was going into the site. That meant I was not a part of that whole adventure in jungle, (I) got to watch the footage and got to talk to the camera men almost everyday.”
The film got underway in 1995 when the director came in and had access to the DND (Department of National Defence), and had heard of this story of a crew going to Burma to follow up on the clues that were given and took him on the journey.
The event that led up to the production was in 1990s where a hunter came out of the Burmese jungle and brought along an engraved pocket watch with him, which later was handed out to a missionary.
“The missionary recognized it was from along time ago and that it had engraving on it, so it had some significance,” said Rankin.
“The watch found its way to the British Museum in London. It’s a series of coincidences because there were two Canadian reporters doing research in the British Museum on a completely different topic.
“They came across this watch and they recognize it right away as being Canadian.”
The watch’s information was brought back to Ottawa, where the search continued and from there started looking at planes the watch might have had connections to.
“The plane was lost after the second world war,” she said.
“The crew were people who were not normally flown together during the war. They were just kind of a rag tag crew that was put together. They were flying supplies on a volunteer basis up into northern Burma and they were dropping them by parachute to the Burmese that were up there. One day they just didn’t come back and we pick up the story there.”
With this documentary be shown in the 100th anniversary year of Vimy Ridge and near Remembrance Day, it shows another year of learning how these events.
“What I’ve learned in producing Lost over Burma and dealing with interviewing some of the family and friends was the huge impact war had not just on the young men that went over, but on the people that stayed behind,” she said.
“And those young men that were fortunate enough to comeback. Not only did their lives change, but they changed permanently.
“That war had such an effect on the world as a whole. I knew that in my head before. But working on this film, I really learned it in my heart, how people were changed.”