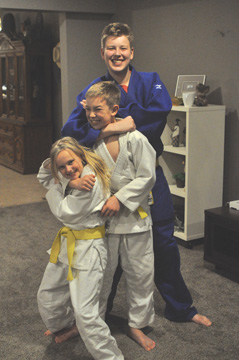 If he is not being a Cypress County councillor or running the everyday operations of Solid Rock Fencing, Robin Kurpjuweit is seeing through his passion for judo as competitor and as a father.
Kurpjuweit along with his three kids Judah, Malakai and Emereece are often seen jumping in the van and going to either the Medicine Hat Judo Club twice a week for training or traveling to a tournament in Western Canada.
“For me as a dad, to be able to spend three hours with my kids and watching them learn ,” said Robin on the bonding.
“But to see my kids to be inspired by what I love and then to want to do that themselves has been really cool. And to watch them become more successful with it, to apply themselves, it’s one of things that’s fun for me.”
Robin started the sport in his pre-teens back when sessions were held at Medicine Hat High School and grew up in a family that was competitive by nature on the farm.
After taking a break, his interest peaked more than before in his return to the sport nine years ago.
“Judo is really a sport of gentle people,” said Robin.
“You have to be able to control strength. I love the fact that you have people come in and can do big things physically in a sport like judo.”
Despite being in different age classes, the kids are on the same playing field in their development.
“Developmentally, all three of them are all at the same point,” said Robin.
“They’re competing at different age classes. But when it comes down to the technical experiences, they’re very much on the same page.”
“What is fun with that is they have the ability to train together, learn together, challenge each other. I think one of the proudest moments for me is seeing their commitment to learning and helping others.”
Robin said the Medicine Hat Judo Club has become more competitive recently as more participants are wanting to go to tournaments.
“It’s an individual sport that allows for a team mindset because you’re encouraging your teammates to do the best that they can,” he said.
Judah is a U16 Yellow Belt competitor and to have fellow family members on the team, he would not change a thing.
“If you’ve ever met a Kurpjuweit, we love the competition and the adrenaline that pumps through your body,” he said.
“We get to see the other-sides of us that not many people see because you’re trying to hide your personality. You’d do anything for others to accept you. It’s a great physical exercise and it’s a great time to be with your family.”
Being a role model for his younger siblings is not the cards for right now but down the line, it is a possibility.
“I would like to but I would like to be a higher rank” , said Judah.
“With my little belt, I don’t have that much experience. I don’t have the option to critique just yet.”
For the youngest, Emereese, she remembers watching her older brothers at three years old and wanting to compete then, but due to her age she had to wait her turn.
Fellow players might have second thoughts when stepping in the ring with her.
“I’m adorable and cute, but I’m very vicious,” she said.
“The first time I thought I didn’t want to this anymore because I was new. Then I do it for two years and then I think I rock.”
The U12 Yellow Belt is a beginner level for the sport but she did well at the Saskatchewan Open and received a participation medal, while a week later in Lethbridge she lost two and won one to get what would have been considered to be second place. But at that age, it is about participation points.
Malakai is a U14 Yellow Belt has learned the techniques of throws, holds and turnovers because when there a medal on the line, those moves become crucial.
“When I was in U12, it was participation medal every single time but this year was new to me because there was actual fighting,” he said.
His skills were put to the test because at the Lethbridge match where he went 1-1 and fought against orange and green belts, which will go a long way with his experience.
“We just try hard,” he said.
“We succeed sometimes and we fail sometimes but we learn from our mistakes.”
“For us, we wanted to focus on getting that quality time in,” said Robin.
“It’s been awesome having it as that family activity. I feel like I’m a teammate with my kids.”