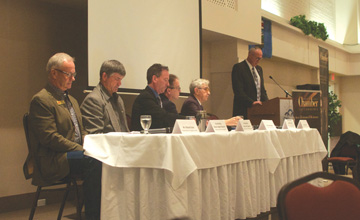 Cypress County Deputy Reeve Richard Oster and Redcliff Mayor Dwight Kilpatrick were a a part of a panel that included Medicine Hat Mayor Ted Clugston, Medicine Hat-Cardston-Warner MP Glen Motz, house speaker Bob Wanner and Medicine Hat-Cypress MLA Drew Barnes during the inaugural Medicine Hat Chamber of Commerce Leaders Breakfast at Chinook Village on Nov. 15.
The chamber of commerce took over the mayor’s breakfast, and wanted to go in the different direction with bringing everybody together to give them a platform to discuss what they are working on, said Sarah MacKenzie, Medicine Hat and District Chambers of Commerce president.
“Seeing how everyone comes together, works together and collaborates,” she said on the focus of the morning panel discussion.
“I was really happy with this morning. There was lots of new faces, which is always exciting. When we go to lots of different of events, it’s nice to see a lot of different people and that means there is more engagement.”
Kilpatrick walked up to the podium and said the town does not have any extravagant projects going on to the small business owners and chamber members in attendance.
“We don’t have anything splashy happening,” said Kiltpatrick.
“I think what we’ve always believed is if you keep a stable, growing town with a tax rate that doesn’t spike, that people can get used to and work with that, hopefully good things will eventually come your way.”
He outline the four goals that the town has moving forward including infrastructure because in 2013, it was proven that there was infiltration in their sanitary sewer system, which is paid by the cubic metre when it hits the Medicine Hat gate.
“That doesn’t make our residence happy when they have to pay for rain water,” he said.
“We’re doing a bunch of continuation projects to bring that down. And also keep what we have already connected to the city, working into the future.”
The town is also working on keeping the business community stable and taking that approach to attract to new people who are interested in setting up shop.
Social environment was another goal because it will help the seniors and youth with housing and recreation.
Lastly, governance and security ended off Kilpatrick’s list in which he said the public services division keeps the town afloat with snow removal.
A skateboard park and splash park upgrades are potential upcoming projects.
Oster said the county has been busy this year because of approving 400 motions in among transitions with multiple CAOs since May.
The county will have more stability with the hiring of Tarolyn Aaserud.
Her goals include provding high quality, safe and affordable services, being recognized for a strong partnership and community engagement and a focus on an economic growth, he said.
Projects underway include the Intermunicipal Collaboration Framework, which is a tool to help municipalities work out a common boundary.
“It is vital to work with other municipalities to address opportunities to best serve communities,” said Oster.
“Whether it be utilities, emergency services or recreation, we’ll make our community stronger and more viable.”
County projects in the next year will include traffic light installation at the Charles Street in Dunmore and the Redcliff/Cypress Waste Management Authority. The county is in a partnership with the town on the landfill facility and the plan is to build an public operations building and a public drop-off.
A trail will also be built between Desert Blume and Medicine Hat.
“It’s nice to be here will some good ole’ Albertans that care about each other, their families and communities,” said Barnes.
“Small business provide so much choice for Albertans. But then we got to look at the layers of burden at both the provincial government and the federal government that put them under the last little while. Small businesses have had to work harder than ever.”