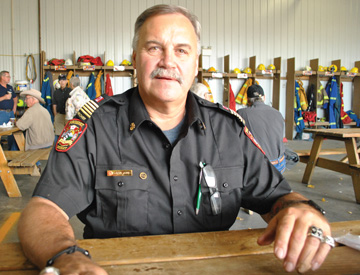 Scott Schmidt
Alberta Newspaper Group
His grandfather was mayor, his father was mayor, and now the time has come to take his own turn at the helm.
Lorne Buis recently took over the top role at the Village for Foremost, becoming a third-generation mayor in the town he was born and raised in. It might seem like simply the natural order of things, but Buis wasn’t champing the bit to take on the role until former mayor Ken Kultgen came to him and said he was retiring.
“If you’re not willing to put time into your own community, where’s that community going to go,” Buis says. “I’ve always been of the belief that you get out what you put into it.”
A councillor in Foremost for 17 years, and the deputy mayor throughout Kultgen’s entire tenure, Buis had been perfectly content in his role until Kultgen urged him to take over. With a trio of new councillors joining the fold at the most recent election, the group needed someone with the right experience to take charge.
Buis knows the ins and outs of the job and the town, and knew he’d have the help needed to make a seamless transition to the new job.
“One thing about Foremost is we’ve had good councillors for a lot of years, so it has been pretty easy to be on council,” he says. “Our administrator is very good at her job and that makes our job a lot easier.”
The residents of Foremost help make the job easier also. The Buis family has owned a farm supply business in town since 1937, and many others in the area have similar roots. He says they understand how Foremost works; there aren’t going to be many big changes, and since everyone knows everyone, they all know the right people to talk to when they do have a question or concern. That makes the mayor’s job easier.
“It’s all relative, right,” says Buis. “Your administration staff, if they’re doing their job, it makes the councillor’s job pretty easy. The staff we have is phenomenal — our public works staff is really good, our office staff is really good — they can handle anything that comes in, and if they need backup on something, they give you a call.”
That tight-knit atmosphere where residents have full access to elected officials could be a tough sell in some larger centres, but that’s not the case in Foremost. With so many people living their whole lives there — and families being able to boast three generations of mayors — it’s clear the folks there have a lot of pride in their small town.
“Our council and our community, we’re very proud of this community,” Buis says. “It’s a great little community that has all the amenities we really need, and we’re not that far away from anything if you need something we don’t have.
“But all the business in town seem to come together, and there is a niche for everybody.”
Buis is taking over the top role at a pretty exciting time for the Village of Foremost. With ongoing projects like the unmanned aircraft centre and a rail yard construction for the wind farm north of town, the town is enjoying a nice little boon right now, giving a boost to the community and businesses within.
“We’re going to be a happening little place for the next while, and that’s going to be great for the community.”