Redcliff resident shows the spirit of Christmas all year 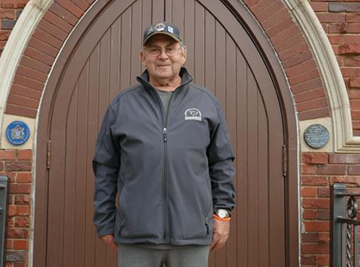 Redcliff resident Phil Monteith is a truly extraordinary person and his kindness has shine through recently with donations to local organizations.
Recently Monteith’s wife, Doreen,has been suffering with some health problems and he wanted to carry on the donating.
“She looked after the donations to charity with $200 given away here and there,” he said.
“But I decided that I wanted to give a little more, but only to local groups where I knew the cash would go 100 per cent to the people who needed it.”
Monteith decided toset about looking for worthy causes.
“We have been lucky in life and now are in a financial position to hopefully make a difference” he said.
To date the Monteiths have given $1000 to the Redcliff Legion, $1000 to the Redcliff Youth Centre, $1000 to the Redcliff Lions, $1000 to Lions International, $1000 to the Redcliff Library to buy new furniture, and $1000 to the HALO Air Ambulance organization to adapt their helicopter to allow patients on a stretcher direct access from an ambulance.
“When people ask me why you always volunteer so much.” says Monteith.
“I ask them, why do you go to hockey games.”
His donating and volunteering started well before he moved to the Greenhouse Capital of the Prairies.
He moved to Redcliff in 1997, having previously lived in Calgary working as a local truck driver. When he lived in Calgary, he volunteered to be the president of the Forest Heights Community association. He saw a need in the community for an indoor ice rink.
“Up to that point the kids skated outside but we really needed something central that could be used in all- weather,”Monteith said.
“There was only one casino in Calgary in those days and our group realized that to make enough money for a building. The best way to raise funds was to volunteer at the casino. The only thing was we had to come up with $50,000 up front money in cash.”
Monteith put a mortgage on his house and got the cash together.
“We made it back really fast, the three day Casino made us $200,000,” he recalled.
This allowed us to get started, we ended up with the first indoor two- rink hockey arena in Calgary at a cost of $3 million.
Monteith also ran for Calgary City Council until an administrater told him that “they” were the ones running things and that if elected he would just be their “mouthpiece.”
He came in third in votes.
He has sat on the museum boards, the town’s subdivision and appeal board, treasurer and president of the Riverview Golf Course and currently volunteers his time with the Redcliff Lions Club.
At the annual Redcliff Days, he runs the concession at the Show n’ Shine event.
The town also recognized him for “Citizen of the Year” for 2017.
Monteith has given so much of his time, talents and finances to make this world a better place, and he truly shows that Christmas giving is not a one-day affair, but something we should all do 12 months of the year.