Suits and Boots wants to get Canadians involved 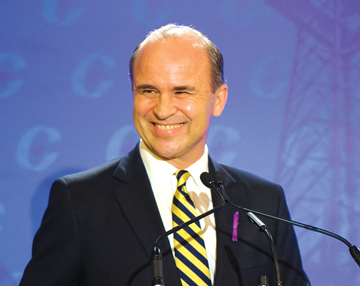 Submitted photo Rick Petersen is the founder and director of Suits and Boots and wants the service industries voice to be heard.

Many people who are employed or unemployed in the service industries feel that their voice doesn’t matter.
The Suits and Boots initiative is hoping to offer that voice to people across the country.
The not-for-profit organization started in April with just a handful of people — it now has thousands connected and working together to strengthen their voices.
“We started with eight people and now we have 3,300 and counting across Canada,” said founder and director Rick Peterson. “The core group of us are in the investment industry and we’re all working towards the same goal — giving people a voice.”
Peterson says the group “had enough” when Kinder Morgan pulled out of the Trans Mountain Pipeline project.
“That was it for us,” he said. “That was the point where we realized we needed to do something to support the resource sector.
“Suits and Boots was formed that the suits, being the business committee, will support the boots, who are the people working on the ground whether they are resource workers or just everyday Canadians in communities like yours.”
As someone on the investment side of the group, Peterson says he hears from a lot of people that investors are shying away from Canada.
“People we’re dealing with are telling us that Canada isn’t a place they want to put their money,” he said. “The oil and gas sector contributed $117 billion to the economy last year and we really need investors to want to come here.
“We need to get things turned around here — we’re not-partisan, meaning we aren’t Liberal, Conservative or NDP, we just want good, environmentally-friendly resource policy.”
Peterson says Bill C-69 is one of the group’s biggest concerns and talking points going forward.
“The next 90 days are crucial,” he said. “That’s when all of the hearings and decisions are going to be taking place on this bill.
“If this is passed there will never be another pipeline built in Canada — we can’t have that.”
Peterson says anyone with a telephone and email should reach out to the group to get in contact with politicians to have their voices heard.
More information on the group can be found online at http://www.suitsandboots.ca.