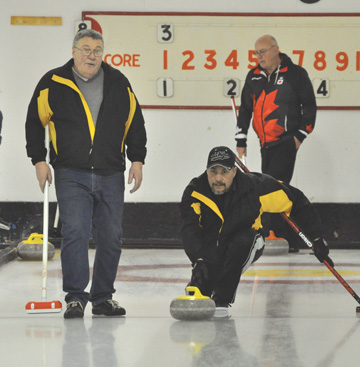 Jason Bodnerchuk throws the stone for Team McNeail Consulting as teammate Allen Meier looks on during the Mens Bonspiel at the Redcliff Curling Club on Feb. 1.

Linda Asham took over the Redcliff Curling Club’s president position from Mavis Martin, who was at the helm for over 30 years.
Now well into her first year there has been learning opportunities curled her way.
“Probably just how much actually goes into behind the scenes like insurance,” said Asham.
“We pay $14,000 a year for insurance. Our insurance policy was up this year. Diving into that and looking at different policies is not my fortay . The curling part of it and organizing bonspiels and teams, that I’ve done before. It’s kind of the other organizational, behind the scenes stuff, that’s the stuff that was the harder part.”
The challenge that has loomed over the curling club has been the lack of people involved running the building.
“I think every year for the last 10 years, we’ve had the conversation of ‘Are our doors going to open?,’” says Asham.
“It always a battle trying to get enough people to make it run. I’d definitely say it’s not a growing sport here. But I think if we can start getting in with our younger kids and into the schools a little bit, maybe we can help that along.”
A seven-team open league runs on Tuesday nights with a mixture of male and female players, six ladies teams play on Wednesday nights and five mens teams play on Thursdays.
Numbers are down a little bit from last year, she said.
“We’re hoping the high enrollment in our juniors will help bring some more youth in our club,” said Asham.
“It’s always good having the little ones running around and eventually they get out there and try it. We haven’t had very many youth in the past. It’s nice to see we had 50 register this year. Hopefully we can continue that program.”
This year the curling club switched the junior league to a week night, which has seen an increase in players, she added.
Two adult ‘Learn to Curl’ nights were hosted earlier this year for those interested in trying the sport, while Two Ends and a Beer for $5 and Glow Curl were also included in the club’s events.
“Any time you can get people with new friends through the door, that’s a potential team for the following year,” said Asham.
“We’re just trying to get as many people through the doors as we can. Most people, when they try it want to join or at least spare.”
More information on leagues can be found at http://www.redcliffcurlingclub.com.