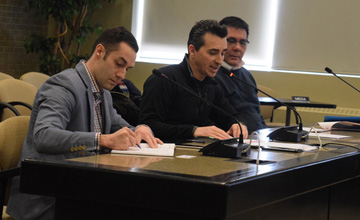 Construction on a $50-million solar park near Suffield is planned to begin in March after Cypress County’s municipal planning commission approved a development permit Tuesday.

The developer, Canadian Solar, plans to erect 90,000 solar panels on 202 acres of privately-owned land that sit abut 10 kilometres west of the hamlet.

On Tuesday company officials spelled out the details of project and also answered operational questions from commission members who were curious about wind, mowing and the potential for fire hazard and, most notably, how the panels operate in snowy conditions.

The answer, said Ryan Tourigny, Canadian Solar’s western Canadian director of business development, is quite well no matter the weather due to a tracking system the panels use to capture the sun, and a two-faced solar panel.

“The technology that we’ll deploy is quite advanced and we’re excited to be bringing it to the region,” he said following the commission’s 5-0 approval of the permit.

Last month the project received a $14-million innovation grant from the federal government linked to its use of bi-facial panels, which basically means both sides can generate power.

They move to track the sun’s elevation in the sky, but during high wind, the panels can tilt into a flat horizontal position to avoid sheering force.

Rays reflected from the ground snow warm the underside enough to create a current and enough heat to melt snow on top. During heavy wet snowfall, the panels would tilt fully horizontal to avoid it from accumulating.

That explanation led Coun. Darcy Giegle to joke, “that’s good, because you’re going to have two (full-time operators) and 90,000 panels – that’s a lot of shovelling.”

Giegle’s other questions evolved around mowing and ground disturbance, and he heard the site is generally flat and 10-metre alleys between rows would be seeded with low grass and mowed.

A reclamation plan is required by Alberta utility regulators to be developed by 2026. Canadian Solar believes the field could be operational for 35 to 40 years with selective replacement of panels over time.

“I like that they’re using new technology,” said Coun. Robin Kurjuweit. “It maximizes the efficiency and mitigates the risks.”

Medicine Hat experiences about 80 days per year when there is at least 1 cm of snow cover – one of the shortest periods of any Canadian city, according to Environment Canada. Southeast Alberta boasts the highest number of sunny days in Canada.

“It’s the best solar resource in the country,” said Tourigny, whose plant would produce 23 megawatts of power in peak conditions and be located on the southside of the Trans-Canada Highway at Range Road 101.

County planning officials say the proposal fits with land-use requirements that make a discretionary use, as well as the county’s strategic plan to support business growth and expansion.

The permit is now subject to a 21-day appeal period. The company will hire a general contractor through the MERX bidding system, and expects up to 200 workers to be on site during peak construction. Afterwards the project will provide two full-time positions and municipal taxes to the county.

Vegetation stripping and levelling for the rows could begin in March and needs to be complete by April 1, according to wildlife habitat restrictions.

A general contractor could be selected in the next two months ahead of a May construction kickoff. The plant would go into operation in the fall, though a storm water drainage plan is outstanding as is final regulatory approval for Fortis to build powerlines connecting the site to a substation across the Trans-Canada Highway.

Canadian Solar has already received approval from Alberta Transportation to work at the site, which borders the Trans-Canada Highway, as well as initial approval from the Alberta Utilities Commission.