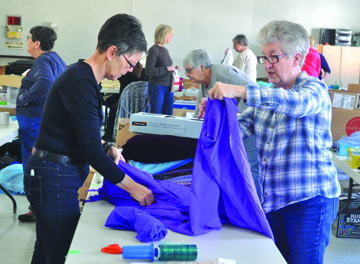 A dozen grandmothers and ‘grand-others’ (grandchild less) that make up the Hat Grannies for Africa group have been sorting through piles of donated sewing machines, yarn, quilts and fabrics over the last four months in preparation for their annual Fabric, Yarn and More sale in March.
The group dedicates personal time to raise money for the Grandmother to Grandmother Campaign, which is ran by the Steven Lewis Foundation. Funds are distributed to the community based groups in sub-Saharan Africa that support grandmothers who are charged with raising children affected by the HIV/AIDS epidemic.
“Lots of grandmothers groups across Canada have fabric sales as their fundraisers,” said Joanie Gilchrist, coordinator for the sale.
“We now have a very successful fabric sale. We get donations from the community at large. We sort them and sell them to a very enthusiastic following of sewers, knitters, crocheters and crafters”
Donations come in year round and this year, and so far sorted pieces filled up two rooms in the basement of the All-Saints Anglican Church.
“We’re a fairly small group but we’ve got a fairly committed group of volunteers that join us for the fabric sale,” said Gilchrist.
An amazing array of quilting has been a hit donation this year along with a large amount of yarn, quilting cottons and a good selection of craft goods and notions, she added.
People come from as far away as northern Saskatchewan to Bow Island, Calgary, Brooks and Medicine Hat and area for the event.
Most fabrics is a $1 per meter and high quality quilting cotton sales for $5.
The group is hoping to exceed to the $6000 mark in sales and have raised $40,000 in the last decade.
The sale is on March 9 from 9 a.m.- 2 p.m. at the St. John’s Presbyterian Church in Medicine Hat.