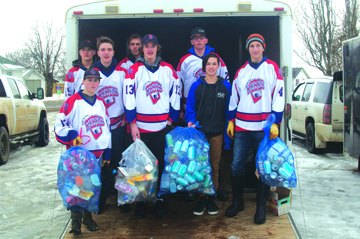 Commentator/Courier Photo by Justin Seward Players from the Bow Island/ Foremost Flyers midget C team did a bottle drive on March 12 in Bow Island to help off-set costs for the teams' provincials trip this weekend.

The Bow Island/ Foremost Flyers midget C hockey team look to end what has been a sensational season this far by bringing home the provincial banner from Whitecourt later this week.
The orange and black have teared it up in league play, playoffs and provincial playdowns, sporting a
30-12-1 record and has created a positive vibe in the dressing room.
“I think it’s the team spirit and doing their best on the ice,” said team manager Andrew Crooymans.
“It’s come out on the win side. You can see it in the dressing room, they love to play hockey. The parents like to see that as well and the kids themselves.
“It’s a team but it’s also family. To come together for one common goal for the kids, it’s excellent.”
The Flyers path to provincials included mini-series against Raymond, Vulcan and ultimately booked their trip to the finale tournament with a series win against Taber.
“I think you just set your goals and those goals that you have within the team, it just sets yourself to keep that motivation,” he said.
“I just see lots in this team that we’re capable of achieving of what our goal is. That’s to go to provincials and to go to the finals.”
The team had done a bottle drive on March 7 and 12 to off-set travel costs and have received tremendous community support.
“The community has been very receptive and supportive for this team as far as raising donations to go to Whitecourt,” said Crooymans.
“But also at the arena. Packing the arena, filling the stands and coming and watching the kids and cheering them on. Just amazing to see the stands full.”
For some of the players it will be their fifth time to provincials in the minor hockey system.
Captain Ben Williams is one of the five graduating players on the squad and it will be his fifth trip to the provincial championships as well and knows how much extra work is needed to be successful to make it to this juncture of the season.
“It’s definitely (a) grind but also a blast,” said Williams.
“I have won it twice. The team building stuff is great. The bus ride is one of the best parts. You either like or hate each other by the end of the bus ride.”
He says the motivation for him to keep the team going will be to “keep them rolling, fresh, to cycle low and play hard.”
The Flyers played in the league final against Fort MacLeod over the weekend and won??
Provincials are in Whitecourt from March 21-24.