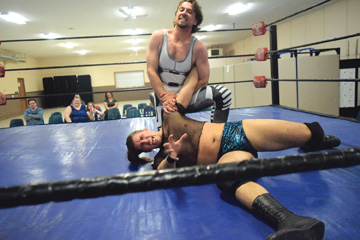 Lethbridge’s Pure Power Wrestling is taking its show on the road through small-town southern Alberta, which included a March 16 stop in Bow Island.
The event was a fundraiser for the Bow Island Minor Hockey Association, which took place at Bow Island’s Multiplex.
“This is real wrestling,” said promoter Kevin Farrell. “This is as real as it gets.”
Participant “Cougar Meat” Kyle Sebastian, 29, has been wrestling since he was 15.
“I like the physicality of it and I’ve always been a wrestling fan, so being able to do all this locally, close to home, for these small communities means a lot to me,” said Sebastian.
“I enjoy doing it more than the large-scale shows because it’s more intimate. The fans can see that it’s more intimate.
“There’s a vibe you get from live independent wrestling that you don’t get anywhere else.”
Farrell says he’s been trying over the past year to bring Pure Power to smaller markets – Bow Island, Milk River, Fort MacLeod, Taber and Vulcan.
“Part of it is to give our guys more opportunity to wrestle. Part of it is that these small towns don’t have a lot of entertainment options, there’s not a lot that does come through some of these communities,” said Farrell. “Our goal is to change that .”
He says Pure Power Wrestling tries to connect with local community groups in each stop of the tour, donating part of their proceeds to them.
“We’re really big on the idea of working with non-profit organizations and charities,” Farrell said. “It doesn’t give the feeling that we’re just coming into the community to take money and run. We’re doing our best to give back as much as we can.”