Spring sun brings snakes out of their winter homes 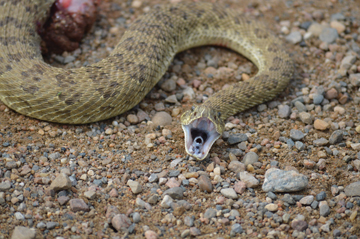 As the weather warms up, snakes start slithering out of their dens to find warmth on the pavement and rocks.

In the Redcliff area, species of the slithering serpents include rattlesnakes, bull snakes and garter snakes, and town officials warn trail users in the area to be extra cautious at this time of year.

“Just be aware that they may be on the path and give them wide berth to any visual movement on the side of the road,” said Barry Steier, Town of Redcliff bylaw officer.

“The snakes usually warn you if you’re getting too close and let’s face it, they don’t want to have any more interaction with you than they have to as well.”

Steier says the start to this year has resulted in only a few reports of snakes.

“The rattlesnakes want to keep their venom for feeding purposes as opposed to protection,” said Steier.

He recommends residents keep a reduced amount of garbage or piles of lumber in their yards as they provide hideouts for snakes.

The bylaw enforcement department, in conjunction with the town, has put up snake warning signs by playgrounds and in parks.

Steier has also given talks to local students.

“Snakes are something not to be feared,” he said.

“They’re natural in the area … give them caution and respect.”

If someone has an encounter with a snake, they are urged to call the Town of Redcliff bylaw enforcement at (403) 548-9246.