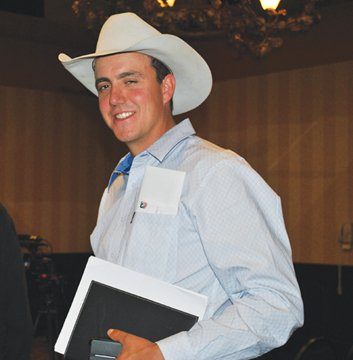 Applications for the second annual James Hargrave Legacy Fund award are being accepted until August.
The award was created last year by the Western Stock Growers Association to honour the fallen Walsh rancher who died in a car accident after battling the Hilda wildfires in October 2017 as a member of the Walsh volunteer fire department.
The $3,000 scholarship award goes annually to a prospective post-secondary student who supports fields of interest through the beef industry including inter-generational knowledge transfer and succession, grasslands stewardship and management and public recognition of the same, water conservation and work done to progress a marketplace for ecosystem service.
These were all characteristics that Hargrave worked on as WSGA’s vice-president.
Although there was one award given out last year, WSGA’s manager Lindsye Dunbar says the legacy fund has just fully developed over the year since it was created.
The idea came to fruition after a producer approached Dunbar at Hargrave’s funeral and said, “James was so young and gave so much to the industry. Could you imagine what we can do if we had 50 more years of him?”
“It became initiated by some of those of us at Western Stock Growers who worked closely with James as he was the vice-president,” said Dunbar.
“We wanted it to be more than a Stock Growers thing. The idea has grown. We have filed and established the James Hargrave Legacy Foundation as a society itself with its own board. There are a couple of guys from Stock Growers that sit on the board. But the board also has some close friends of James’ and we have reserved a spot on the board for his wife (Elizabeth) when she is ready to step up and do that.”
Dunbar worked closely alongside Hargrave and remembered him fondly in the beef industry with WSGA.
“He was tireless and was passionate,” she said.
“A lot of what stock growers and Alberta grazing lease holders did was to advocate on behalf of those guys who upright on the land. The whole national grassland stewardship is really a big part of what is in stock growers mandate as well as grazing lease holders, as those guys operate on crown land.
“James would go to meetings and build relationships. If anybody needed to visit on any of that sort of stuff to improve understanding, awareness, James was so good at that. There’s something about the way he talked that made people listen.”
Anybody can apply for the award through the website at jameshargravelegacy.com up until Aug. 15. If applicants have any questions, Dunbar can be contacted at 403-250-9121.