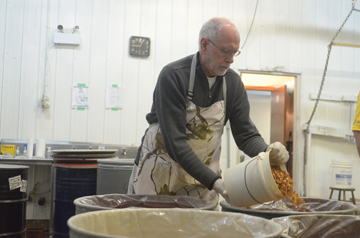 The Prairie Gleaners Society is celebrating its 10-year anniversary this year and the organization recently announced it had hired a new president.
Edward Codding has been volunteering three or four days every week with the Prairie Gleaners for roughly three years and says he is excited to get going with the organization.
“I had been on the board for a year prior to this and have volunteers for a few years,” said Codding. “I’m honoured that the rest of the board thought I would make a good president.”
Codding says he was going through a rough patch before he was approached about volunteering at the society and that the newfound passion has given him more direction in life.
“My wife passed away about four years ago and after she passed I had become very sedimentary,” he said. “My neighbor is the plant manager here and he invited me to come up and I think I just caught the vision.
“This gives me a reason to be up and out of the house and doing something good to help people.
“Over the two or three years I really have fallen in love with what is happening here and I’m really committed to it.”
Codding lives in Redcliff and retired in 2003 from Suncore Energy in Fort McMurray. He says he will have lots of new responsibilities as president.
“From running meetings to becoming the face of the organization — there’s six other gleaner organizations in Canada so I will be the liaison between all of the groups,” he said. “It’s going to be a lot of work, but I am looking forward to it.”
Codding says he will be keeping the position for as long as he feels he can do it.
“I’m going to be doing this for as long as I can keep up physically,” he said. “I’m in my mid 70s and in good health, so I can see three, four, fives more years of being here on a regular basis for sure.
“I really enjoy doing this.”