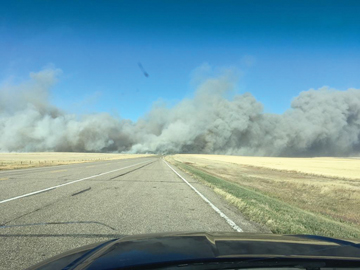 PHOTO COURTESY KEN KUNDERT Image of the Hilda wildfire on Oct. 17, 2017 as it spread across the landscape. The Provincial Fire Commissioner confirmed publicly for the first time on Thursday, there was an element of human agency in the cause of the fire.

The Office of the Fire Commissioner has officially ruled that the October 2017 Hilda wildfire, which ravaged several properties and farms and indirectly led to the death of Cypress County volunteer firefighter and local rancher James Hargrave, was accidental.
The final report on the incident was originally filed in April 2018, but was only recently released to the Alberta Newspaper Group after a request to the Freedom of Information and Protection of Privacy Office.
According to fire investigators, the fire originated at a burn pit at the local Roseglen Hutterite Colony. The colony was given a permit from Cypress County to burn an old building on Oct. 13, 2017. Members of the colony cut up the old building into separate sections and burned them throughout the day on Oct. 13.
While colony members did watch the pit for several hours after the burn finished, and even checked the next day and did not see any smoke, fire investigators say the embers of the fire were likely caught in the voids between the rocks of the fire pit beneath and continued to smoulder unextinguished without being seen.
On Oct. 17 the Hilda area experienced wind gusts of over 100 km/h, the Commissioner’s Office confirmed, and these high winds, combined with low humidity and dry conditions, reignited the fire pit’s embers and spread the fire throughout the countryside.
The Hilda wildfires burned about 35,000 hectares, damaging pastures, fields, fences, buildings, killing 200 head of livestock and destroying one family home. The total estimated cost of uninsured damage topped $29 million, according to the Hilda Fire Recovery Committee. Volunteer firefighter James Hargrave died in a vehicle rollover under conditions of poor visibility while out fighting the blaze.
The official report confirms what people have known on the ground for some time, says Hilda and Community Association president Andy Kirschenman, whose parents lost their home, crops and much of their farm infrastructure in the wildfire.
“There is nothing new in the report we didn’t already know,” stated Kirschenman. “Getting the official word now, I think it will help some people move forward. But I think many people already have moved forward, and moved on.
“I think it is probably better to have no surprises than to have surprises – this was exactly what was expected: it was an accidental fire that came out of a controlled burn that was basically fuelled by extreme weather, pretty much.â€ˆWithout those wind speeds, it might have been a more fightable fire. But, more likely, it wouldn’t have started in the first place.”
Kirschenman admitted there has been some lingering bad feelings in the region toward the Roseglen Colony in the aftermath of the fire. He feels it’s time for local residents to move on from those as well.
“There will always be some animosity toward them, I guess,” conceded Kirschenman. “(The fire) was another reason for some people, but we have a good relationship with them. They are not as involved in the community as some colonies are in other places, but they do play a role.”
Kirschenman said he also has no appetite for legal action against Cypress County for issuing the fire permit to the colony in the first place.
“It has been almost two years – most people have moved on,” he said. “I think the year we had last year was by no means a bin-buster, but we were able to grow some crops, make a little bit of money back and put some residue back on the ground.”
Kirschenman said the strongest feeling he has now thinking back is gratitude to the many people who helped out during the fire and its aftermath – with a special thought for Hargrave.
“We appreciate his sacrifice,” stated Kirschenman. “And there were other sacrifices made to help us out that were definitely not to his level from other people who came here from all over the region. I have talked to a few guys that knew James well, and they said first and foremost he would like to have been remembered as a rancher who was a good steward of the land. I think the new Legacy Fund created for him goes toward that place where his heart truly was – in restoration and grassland management.”