The Drone Effect: Going beyond visual line of sight 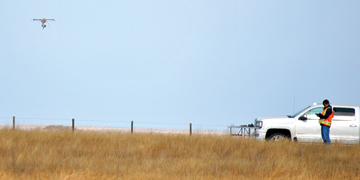 Foremost’s UAS Test Range (FUTR) is a Transport Canada approved test range for drone operators. The range has a Beyond Visual Line Of Sight (BVLOS) allowance.

The bigger user is really the companies that use drones, as part of their business. Those companies are trying to do something with them â€” whether theyâ€™re trying to image a roadway or survey an area or inspect pipeline,â€ù he said, adding companies might also want to image different agricultural fields and/or crops.

For any of those applications thereâ€™s only a certain amount companies can do visual line-of-sight-wise, Hanna noted. Visual line of sight means they’re flying within 500-700 metres from where the pilot is located.

Hanna said the pilot and an observer keep the drone in sight at all times to make sure there are no collisions with other flying objects possibly in the air.

There are many applications that are not well-addressed by that approach of flying a drone only 500 metres from its operator, he said, adding the pipeline and forestry industries are examples. That instantly becomes beyond visually out of sight,â€ù he said. In some cases, the visual line of sight could be less than 500 metres.

We’re just working on that now. We’re still new at this, so we’re developing an accreditation. Itâ€™s a certification of sorts. And, weâ€™re developing a flight test plan companies can use to address the technical issues and the operational issues associated with what that certification is,â€ù he noted.

Small companies trying to grow their businesses want to be able to do this, he said. They want to be able to address these other applications that require beyond visual line of sight. That’s what we’re lined up to help them do,â€ù Hanna said.

For more information about the range visit foremostuasrange.ca. Operating season is from Aug. 1 to May 31.

This range is one of only two in all of Canada. The other is in Quebec Hanna said.

We’re fortunate in Alberta to have this in our backyard. Alberta has more companies operating and utilizing drones than any other province in Canada, regardless of their respective populations,â€ù he said.

BVLOS certification is the next step in the process and very rare, Hanna said. There was only four issued last year in all of Canada and that was under a pilot project program Transport Canada launched.