Redcliff Days offers something for everyone 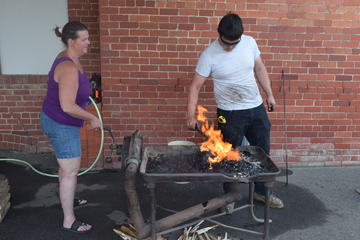 Commentator/Courier photo by Jeremy Appel Corinne and Justin Watson provided a blacksmithing demonstration at the Redcliff Museum as part of Redcliff Days.

By Jeremy Appel
Alberta Newspaper Group
Whether you’re looking to learn about the town’s origins, check out a display of motor vehicles or catch up with friends over a beer, Redcliff Days had it and more to offer from June 14-16.
Who’s on Third hosted a beer garden throughout Saturday, which transforms into a more club-like atmosphere with live music in the evening, dubbed “Whoosapalooza.”
Owner Chris Czember says Redcliff Days provides a homecoming opportunity for people who grew up in Redcliff and moved away, as well as a chance for locals to make new friends.
“It brings everybody back together,” he said.
“There’s a lot of people that go away for school or work and it’s summertime now, so they come back for Redcliff Days and a beer garden’s a good place to go and catch up with old friends.”
Czember compared the night-time atmosphere to a mix of a club and campsite, with twice the live music offered in previous years.
“We’re trying out two bands and doubling up our entertainment for this year,” said Czember. “It’s more of an outside-club feel, but very relaxed … You can stand around and chit-chat with strangers.”
On the more educational side, the Redcliff Museum had a blacksmithing demonstration for those interested in the practices of early settlers in the town.
Volunteer blacksmith Justin Watson says it’s important for people in southeastern Alberta to learn about their heritage.
“We try going for the traditional methods. That’s what brought us to Alberta,” said Watson. “If we didn’t have blacksmiths, we wouldn’t have trains or railroads, horses or horseshoes, to get us out this way. It’s something we try to keep alive.”
The Redcliff library had a book sale fundraiser throughout the day June 15, which manager Tracy Weinrauch says she expects to raise at least $2,000 for the library.
She said the funds go towards library initiatives, like the Summer Reading Program.
The sale operates on a pay-what-you-can basis, which Weinrauch said is more effective than having books priced individually.
“When they switched to the donations system, they were actually able to earn more revenue from the sale,” she said.
In addition to serving as the library’s major annual fundraiser, Weinrauch says it’s also a great opportunity to promote literacy, for young and old alike.
“We’ve had lots of parents coming here today to pick up summer reading books for their kids. There’s always people wanting to pick up their books for their summer holidays,” she said. “Reading books keeps your mind growing.”
A centrepiece of Redcliff Days each year is the show-and-shines — one for cars at Lions Park and another specifically for motorcycles at the Dawghouse.
“Everyone puts their bike in and the winner gets a trophy of some sort,” Troy Fendrick of Dawghouse said.
They also have freezies and a bike raffle for children who come by.
Fendrick says the show-and-shines are always a solid draw because people can view vehicles they may not have the ability to check out otherwise.
“We all like to see things we don’t know about, so when people who aren’t interested in cars, when they see nice cars that draw their attention, that’s what they come look for,” he said, adding that it’s the same for motorcycles.
“It’s an opportunity for people who don’t ride to come check out some bikes, talk to some bikers and see if it’s something they’re interested in.”