Redcliff Museum sees some clean up, focus on student tours 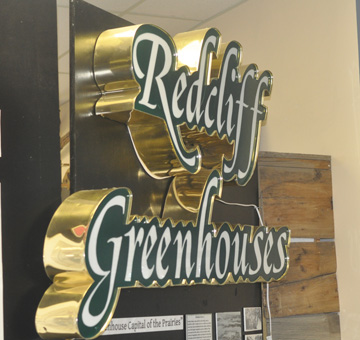 When Alex and Margaret Grant took over as managers for the Redcliff Museum in November 2017, they wanted locals to appreciate their history.
The Grants have a passion for history and since taking over have shifted their focus more so to making the museum more visually appealing and placing more of a focus on educating local students through tours.
“The first thing we did was to look at the signage,” said Alex.
“Quite clearly the signage was in some cases in bad repair. What we did with a young lady, who was my (summer) student, we made completely new signage with colour on the outside where we actually did the print and laminated it so it became reflective and caused a little bit more lighting. Then we put it on our foamboard so it could be placed on the boards and can be removed at any stage we wanted to.”
The improved signage was the first fix on a list of things to come in the last year.
“It clean the place up a little bit. It was quite clear there were items around the museum that were a little bit disastrous to be honest because you wouldn’t want to look at these items in the museum because they were in poor repair and some were in bad quality,” said Alex.
“We wanted to make sure we were presenting to the public something that was clean, legible and enjoyable.”
The other focus was on digging into the history of the items for school tours where the tour talk is about comparing the historical item from years ago to present day.
As soon as students walk in the door, the group stops right at the milk churn, a rattlesnake skin, a scythe and branding.
“We’ve discussed these items through the ages and asked them what they thought was easier and quite clearly they’ve gone for these days,” said Alex.
“What we do with the milk churn, is we say to the kids ‘Where does milk come from?’ In most cases they tell me it comes from cows. What I do then is show them pictures of what they’re doing at the same time.”
“I show them a picture of an original scythe. I then show them it being used, I show them how they sharpen it. I also have a handheld sharpener which belonged to my grandfather and it’s over 100 years old. Then I rub it down the blade and then they can get the sound of your irritated teeth.”
“It’s quite important I talk about the rattlesnake in this day and age. We have a skin that we show them and we ask them the question ‘Why does the snake shed its skin?’ I show them the picture of the real guy. The answer it wants to get clean, it wants to get parasites, ticks and insects (off) which are on it.”
The Grants explain that branding is meant for sticking an iron in a fire to brand their cattle to identify them.
Laundry is talked about as well with difference between the washboard and the current washer and dryer. The differences in school rooms are educated on.
A police cell is also shown on the tour where students ask why the mannequin lady is in the cell and Alex’s response is “because she broke her curfew which was suppose to be 10 p.m. at night. That’s why she’s looking so sad, waiting for her mom and dad to come and collect her from the police station.”
With all these presentations at the museum, it is of benefit to educate the young people first because of the very little knowledge they have on history, said Alex.
“We want to relate the past to the present. Education wise, that’s good for them to learn about the differences and how easy it is these days and how difficult it was in the past,” he said.
“I think it’s important not only when you’re discussing with kids, but to actually show them what’s going on. They absorb it better.”
Other visuals include on the local scene are the I XL Brick Plant and its local history as well as the greenhouses.
Every Thursday during the summer they have a trivia question on a historical item through Facebook.The Redcliff Museum is open Tuesday to Saturday through to the end of August from 10 a.m.-4 p.m.