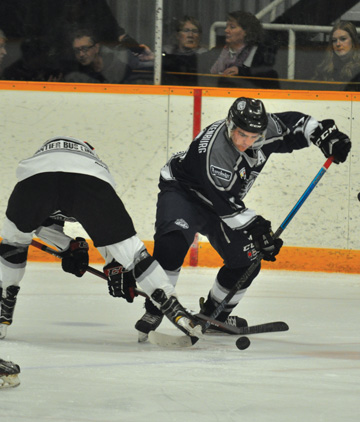 Medicine Hat Cubs forward and Bow Island native Tristan Stensrud is feeling fortunate after having a serious dirt biking accident on June 22.
The 20-year-old overage forward was with his buddies dirt biking down by the river near his hometown when he ended up gaining 40- feet off a jump and did not come down cleanly and ended up hitting his head, suffering brain bleeding and an eye injury.
“I was unconscious once I fell,” said Stensrud.
“A buddy’s girlfriend and another buddy’s girlfriend, they brought me to the hospital in Bow Island. I was unconscious from Saturday at about 11 a.m. until three days after that. I don’t remember from Saturday from 11 a.m. to about Thursday.”
It was upon arrival at the Bow Island Health Centre that it was determined that Stensrud pupils were dilated which indicated his brain was bleeding. He then was transported by ambulance to Medicine Hat before being airlifted to Calgary.
“I had (multiple) CT Scans and one MRI,” he said.
“The CT Scans were to see how much the brain had been bleeding or if it was continually bleeding. It seemed that after the first CT Scan they could tell it went down. They didn’t do surgery on me then.
“My eye is quite damaged to go to the right. I just have to wait for it to get better. If it’s not better the next time I go to Calgary in two months here, then I’ll have to have eye surgery.”
Stensrud looks forward to hockey in the winter time and doctors told him they’ll see how well his eye is doing prior to surgery.
“If I go back and I can see that my eye is better then they said about two to three months I’ll be off the ice,” he said.
“I should be back just at the beginning of the season and get ready for hockey then,”
His goal in the meantime is to eat healthy and do some walking as he is not allowed to do any lifting.
While it’s his last junior hockey season, there was no doubts setting in that he would push to be back.
“I’m going to do everything it takes to get back on that ice, he said.
Stensrud was released from hospital on July 3 and says he feels good and has had no headaches for the first week since he’s been out of the hospital.
“This will be week three that I haven’t had a headache,” he said.
“I’m down a little bit of muscle form not lifting anything. But other then that I feel really good.”
The outpouring of support has been great as his Cubs teammates came up and visited him in the hospital as well as close friends.
“The Town of Bow Island was pretty shook up about it,” he said.
“The support from them and the support other people in the community was unreal. I owe a lot of people thank yous for that.”
Cubs’ general manager Dave Kowalchuk says there was a feeling of shock when the news first broke of Stensrud’s accident.
“I think Steve Leipert (team CO-coach) was the first one to find out,” said Kowalchuk.
“He actually let me know. From there it was talking to Quinten Karg, our former captain, Tavin Stadnicki and MacKenzie Fritzler, they were all getting information. Everyone was concerned. Our thoughts and prayers are with them. His mom and dad were with him the whole time and we knew he was in good hands.”
“It’s scary. Hockey is a game that everyone loves to play and we put a life and limb in playing all the time. When it comes down to someone’s life it really hits home for everybody. We’re happy it wasn’t more serious and we’re glad he’s getting better.”
Staff and players got together a few days after the accident and gave the family money to cover the fuel, accommodation and food while they were staying in Calgary.
“The boys got a card and got all the guys to sign it and took it to see Tristan and give that to his family,” he said.
With Stensrud hopefully being back in the line up later in the fall, Kowalchuk thinks that that’s a true testament to his character and the rest of the leadership group that includes Stadnicki and Karg.
“Those guys are warriors,” he said.
“Something of this magnitude to knock you out and to come back and really have the drive to want to be a part of this big thing we’ve got going on, it’s not a surprise. It just shows that leadership group is pretty strong.”
The club will monitor him as training camp gets closer and discussions will then commence as to where he will fit on the team.