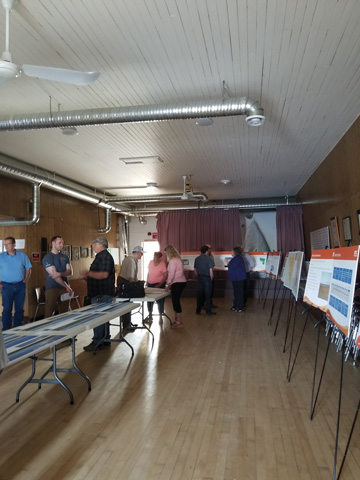 Photo submitted by RES The proposed Rattlesnake Ridge Wind Project had an open house on July 24 at the Whitla Community Centre.

By Samantha Johnson
Southeastern Alberta is a hotbed for wind and solar projects: either completed, under construction or in the planning stages. According to the Moving Forward Report for the Southeast Alberta Renewable Energy Strategy from April 2018; out of the 127 proposed wind or solar projects, 61 are in southeast Alberta, accounting for 48 per cent of the total.
On Wednesday, July 24, a community open house was held at the Whitla Community Centre by BHEC-RES Alberta L.P., a partnership between Renewable Energy Systems Canada (RES) and Berkshire Hathaway Energy of Canada (BHEC). The purpose was to inform the public about the proposed Rattlesnake Ridge Wind Power Project. This is the second one they’ve held, the first was during September 2018 in Seven Persons.
The open house was a well-planned event with several RES employees on-site to speak one to one with all who attended. The turnout was good, with the parking lot filling up right at the 5 p.m. start time. There were snacks and beverages on hand and small groups talking together around the room.
Ron Galbraith, a resident of Seven Persons, is the local RES representative and said they were, “hoping to start construction in August of 2020 and, if all goes well, be in commercial operation by December of 2021.”
Once operational, the project will generate a maximum of 117.6 megawatts of power delivered directly into the Alberta grid.
While RES is constructing Rattlesnake Ridge,Galbraith explained, “the long-term owners will be BHE Canada – A Berkshire Hathaway Energy Company.”
According to the information package, the company will be filing their project application with the Alberta Utilities Commission (AUC) later this fall.
On Aug.14, a public hearing is being held at the County of Forty Mile offices.
The purpose of the meeting is to change the land classification of the land from agriculture to Wind Energy Facility

Even though Rattlesnake Ridge is still in the planning stages, the local community has already benefited.
“Since working in the area, we’ve donated to the Bow Island Health Foundation for the past four years at $5000 per year and there are still two years left in that commitment,” said Galbraith.
He mentioned RES has also given donations to the Etzikom Museum and Historic Windmill Centre, as well as both the Bow Island and Foremost public libraries. In addition, they’ve sponsored the family swim at the pool in Bow Island, as well as the Troy Loney Charity Golf Tournament.
Rebecca Crump, project manager for Rattlesnake Ridge added “both improved and unimproved County road allowances will have to be upgraded to support the large trucks required to bring infrastructure to the site during construction. Improving the roads will provide residents with better access to many parts of the area”.
Locally, the benefits only increase according to Crump.
“We will source as many jobs locally as possible and source construction and building materials locally as well,” she said.
There are over 40 individual landowners participating in the project who will benefit directly by receiving payments for all infrastructure on their land.
In addition, the landowners only lose production on a very small portion of their land.
“The study area (for Rattlesnake Ridge Wind Power Project) is 12,000 acres,” explained Crump, “each turbine, including access roads, takes up approximately one acre and the landowner is able to farm around the base.”
The project package lists the following local benefits:
Municipal tax revenues throughout the life of the project.
Construction and operations jobs and support services during construction and throughout the life of the project.
Contract opportunities for local businesses.
Increased local spending on goods and services during the project’s development, construction and operational phases.
If you were unable to make it to the open house in Whitla and have any feedback about the project, office hours in Bow Island (137 – 5 Avenue East) are on Tuesdays from 4 p.m. -7 p.m., Thursdays from 8 a.m.- 11 a.m. and every other Saturday from 10 a.m.. to 1 p.m.. (the next one will be Aug. 10) throughout July, August and September. The primary phone number is 403-458-3253 and email is rattlesnakeridgewind@res-group.com.