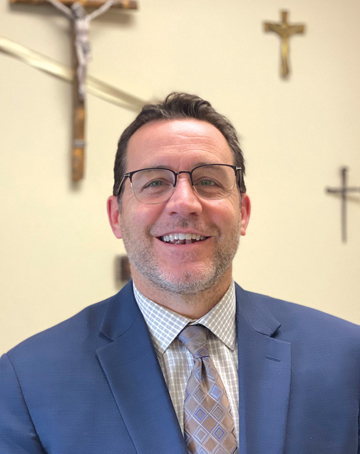 Paul Dunphy is about to start the next chapter in his life.
Dunphy, originally from Ottawa and now living in Okotoks, will begin his new gig as the deputy superintendent of the Holy Spirit Catholic School Division in January and he says his family is getting ready to make the move.
“I know it’s still a few months away here but I’m excited to get going,” said Dunphy. “A few people I know passed along the job posting to me – after sending in my information and doing an interview I was honoured to be selected to the position.
“I’ve been working in Okotoks since 1995 and I’ve been doing education since then.”
Dunphy got his education degree in Quebec and immediately moved out west to begin his career. He has spent a lot of his career teaching high school social studies, but has also spent years working as vice principal and principal at two different schools – he also spent one year teaching in Japan.
“I have a lot of experience in education and that’s why I felt ready for this new position,” he said.
Dunphy will work with all schools in the district, including St. Michael’s School in Bow Island. He says he doesn’t know the exact specifics of the job, but is excited for a new challenge.
“It’s going to be a little bit of everything – it’s a pretty wide-ranging job description,” he said. “In the coming weeks I’ll be sitting down with the incoming superintendent to figure out who will be doing what.
“We’re going to be going with a team approach to dealing with all of the different things we’ll face.”
Dunphy and his wife have five children, all of which will be coming with him on his new journey. He says it’s going to be a lot of work to move, but will be worth it.
“It’s going to be a bit hectic, for sure,” he said. “I know we’re looking forward to it and that it’s going to work out well for us.”