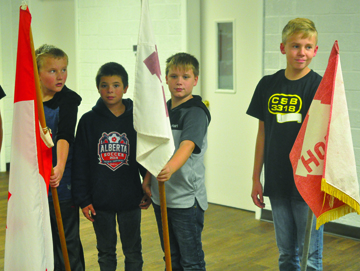 Commentator/Courier Photo by Justin Seward C.S.B members get ready for a Stockade on Oct. 8. The activity is meant to bring the whole group together in unity for a common purpose of reverence and respect for our country and its flag.

The Christian Service Brigade (C.S.B.) is celebrating its 50th year in Bow Island this month.
The boys club, which is for young males from Grades 1 to 7 in the community, runs every Tuesday night at the Bow Island Evangelical Free Church from fall through spring.
Walter Pahl is a ranger with the program and was a part of the group that started the group 50 years ago and as been around helping ever since.
“We started our club here in the church, the C.S.B., in October of 1969,” said Pahl.
“C.S.B. started up in Illinois in 1937 and it just spread across the nation and moved into Canada. Medicine Hat probably had the first C.S.B. club locally here and they came up and brought four boys with them and showed us how the program was ran. From there we started up our own club and we’ve been going ever since.”
Pahl says the men in the church at the time wanted to start up a boys club.
“I’ve got two boys. I’ve got three boys and we want them to have high morals and know Jesus Christ in their Savior,” he said of the initial thoughts the church had on starting on their own club.
Back in 1969,there were six boys in the club and two leaders and then as the years went on the club kept expanding, he added.
“When we first started we had more boys than leaders,” said Pahl.
“We started in the schools. First at Gershaw and then we moved to Burdett School and we were looking for a gym. Then they built the church here and put a gym on it and we’ve been right here in the church for years.”
What he remembers from those first couple years of the club was the parents were interested and as time went on there was a change in their boys.
“Each evening we would have a presentation from the bible and then we would go into games and always had a craft,” he said.
“It was interesting enough that the boys kept coming back.”
Pahl says what has kept him coming back is he has always enjoyed working with the boys and if he can be a pal to them and help them keep their morals high, he said.
The program has seen growth in upwards to 40 kids in the last couple of years and involves camp outs, games, singing and learning about God’s love. There are also swimming outings, paintball and Tigers games. The boys do special projects each year and in the past have built wooden cars to race, model rockets and how to safely work with wood.
Educational learning teaches the kids safe gun handling, how everyday items work, how to care for those that are less fortunate.
The boys also go out in the community collecting bottles for drilling wells in Haiti and for the refugee family that will be coming to Bow Island in December.
“We meet for a couple hours, play games, have bible lessons, do activities related to those lessons like (a) further question and answer period,” said Josh Klassen, a C.S.B. leader.
“We put a strong focus on spending time in the bible so the kids are familiarized with that start to be able to learn the word of god for themselves.”
Klassen moved back to Bow Island after finishing college and saw a great opportunity to be involved and continue on the work they’ve been doing.
“It’s been neat to be a part of that and work along side them,” said Klassen.
He reflected on from time he was in the program back in the 1980s and now how it has grown.
“Being a part of the program from a kids perspective, there’s things I really like doing and I wanted to be there for a lot of the fun activities which drew me into the program. But as an adult looking back on it now I see a lot of the value in the good solid biblical teaching.”
In celebration of 50 years, C.S.B will be hosting an alumni ball hockey tournament from 1 p.m. to 6 p.m. at the Cherry Coulee Christian Academy on Nov. 30 . All alumni and current boys are welcome to check out the program on the day. Dads, grandpas, uncles and brothers are able to register as well for the tournament.
Registration is $10 and can be done by calling Klassen at (403) 952-1030 or Doc at (403) 548-4272 by Nov. 17.