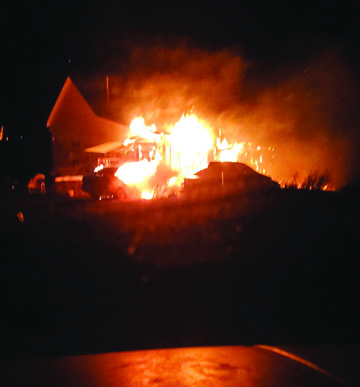 Photo Submitted by Ron Brown Ron and Sharron Brown's home went up in flames on the night of Oct. 7.

For County of Forty Mile residents Ron and Sharron Brown, the night of Oct. 7 will forever be inscribed in their memories.
However, it was an event that will hopefully soon be forgotten as their Range Road 80 home burned to the ground and the senior couple lost their home and dogs.
“We believe the area of origin was around the outdoor deep freeze and the extension cord that was plugged into it,” said County of Forty Mile fire chief Dustin McGarry.
“All we know is it did spread from the area of origin to the structure. We had a strong wind out of the west that potentially pushed the fire to the eastside of the house along the south wall. The fire just swirled around in the wind.”
The Browns were coming back from being in town and were home less than a half an hour before they had to vacate.
“My wife just came out of her bedroom to get some insulin and the flames were at the window,” said Ron.
Ron says his wife has not been doing well since the fire.
“I respond to things differently than she does,” he said.
“You lose a lot of things that you didn’t really want to that are irreplaceable.”
It was while the fire was burning that Red Cross showed up with blankets and a kit.
The Browns have spent a few days at their grandson’s place in Medicine Hat.
For the couple, it is too early yet for them to determine a plan until their insurance company is contacted and the fire investigator determines the official cause of the fire.
“As they determined it was accidental, so that’s a good step initially,” said Ron.
He anticipates they will rebuild on the property they have called home since 1997.
Gary Truscott and his wife are good friends of the Browns having met them when they moved to town five years ago and he has set up a trust fund account at Servus Credit Union for those interested in donating to help the couple get back on their feet under Ron and Sharron Brown.
“Donation can be made at any branches of Servus Credit Union,” said Truscott.
“We put some posters around today in Bow Island (Oct.15) and tomorrow I’m going to Foremost and put some around there too.”
Truscott’s reaction was “It was quite a shock and being seniors 74, 75 years old, it’s kind of hard to recover.”
“Ron is a music fan and he had records and tapes and stuff that are destroyed.”