St. Michael’s School students to be aired on PBS documentary 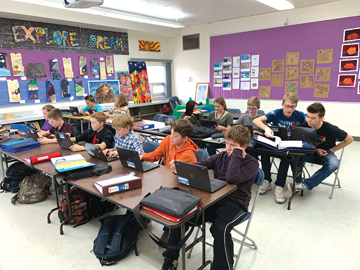 St. Michael’s School students in Grades 7-9 will have a four minute segment on PBS’s Information Matrix hosted by Laurence Fishburne in January 2020.
Information Matrix is an award-winning educational television series that highlights the evolution of education, medicine, science, technology industry through inspiring stories.
A PBS Crew was at the school earlier this month to film the students and their involvement with Nelson Canada’s digital learning ecosystem Edwin.
Edwin is in its second year at the Bow Island school and its built to ensure all students have equitable access to high quality learning resources that are delivered in a 2-in-1 laptop. Its features include a rich library of multimedia content tied to provincial curricula and top notch software partners.
Holy Spirit Catholic School Division superintendent Chris Smeaton says Nelson had contacted the school division about the opportunity.
“They know that St. Michael’s is one of the leaders not only in our division or in Alberta but possibly in Canada,” said Smeaton.
“They wanted to get a school that really highlighted the use of Edwin. The Edwin ecosystem is something that can be showcased to a large school, but I think sometimes we forget about how nimble a small rural school can be and so they were exceptionally pleased to see how it was working in a small rural kindergarten to Grade 12 school and they wanted to showcase that.”
Smeaton along with nine students, a parent, school principal Chris Sumner and two teachers were interviewed about Edwin.
“ I think especially for our students, getting the opportunity to be interviewed for a TV show is probably pretty exciting. They were nervous and everything else,” he said.
“We did a little work prior to, to help them understand what it’s like to be on camera. The school community was extremely excited.”
Smeaton says what the opportunity has allowed St. Michael’s students is to get a leg up on some of the things that they would not be able to do without the Edwin device.
“It’s leveling the playing field for students in rural schools,” he said.
Sumner says it meant a lot for the school to have this opportunity.
“I think it means a heckuva a lot,” said Sumner.
“To be one of two schools in Canada and I think there is another four in the United States, I think it’s a reaffirmation for our community, teachers and students that it says a lot about what we’re doing and about what we’re doing is on the right track. It was a great honour.”
With the program being in its second year, the school has felt blessed to have two teachers who spearheaded the Edwin concept.
“I don’t think it would have taken off as well as it has if those two particular teachers didn’t’ run with it and run with it hard,” he said.
“It’s almost in a lot of ways tailor made for personalized instruction … They can with the Edwin apps that are available explore different ideas in greater depth and finally it gives them an opportunity to work at their own levels.”
Four schools in the school division had taken advantage of the opportunity with the Edwin pilot project and students had to get accustomed to Google Classrooms.
“Students and parents were very excited about that,” said Smeaton.
“The communication piece between teacher-student, teacher-parent was exceptional and once they learned the Google Classroom system, then they started using the Edwin ecosystem. One of the things we’re finding with students is they’re enjoying the built in apps that are there. Things like Knowledgehook that does math and We Video, there is a great essay jack they can use to develop their writing skills.”