Joy of Giving campaign has another great year 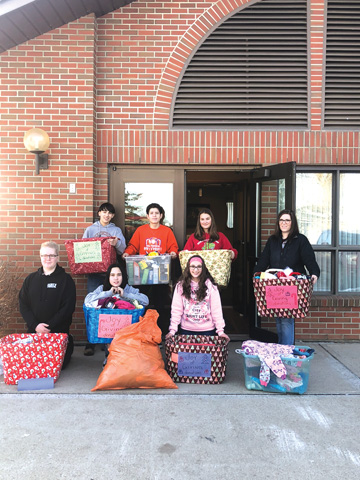 Senator Gershaw students picked up the donation boxes for Joy of Giving campaign at ATB, Servus Credit Union, Apple Drugs, the hospital, and the Susan Anderson Library and delivered them to the LDS Church where a group of students from St. Mikes assisted to unpack and sort both the donations and the grocery orders .

The Joy of Giving campaign wrapped up for another year on Dec. 19 and the community has stepped up again to help fill Christmas hampers for those less fortunate in the Bow Island community.
There were 87 volunteers registered for delivery, sorting and packing the hampers and 30 hampers prepared which will cover 52 adults and 58 children.
“Everything has gone fairly smoothly,” said Alta Magee, campaign chair.
“We’ve had a lot of support from the community and I think what amazes me most is the young people and how much they support it.
The campaign had an additional school help out with donations this year.
“We had a group of Grade 9 students from Burdett who took one of their field trips and went shopping for Joy of Giving,” said Magee.
“I know the representative from Burdett School phoned and said is it something you could entertain or could we do this and I said ‘by all means,’ and when she brought the donations in, she was just thrilled and said the students had a wonderful time.”
The two local 4-H clubs, Senator Gershaw and St. Michael’s students also helped out sorting the hampers as well as events to help out the cause.
Magee says donations were down this year due to the Tru-Co Challenge, which brought in 1,300 Ibs of food last year.
“With our donations and with what we were able to purchase with our monetary donations, (we were able ) to make up some pretty good hampers,” said Magee.
Magee says people are familiar with the program and with going on for so long, it’s something the community expects to have.
This was Magee first year chairing the campaign and overall it was a positive experience.
“I have a great team and the rest of the committee,” she said.
“It’s not just me, it’s the whole committee that works together with the whole community and I think that’s the secret to the whole thing.”