Dunmore’s Gasoline Alley structure plan to be completed by spring 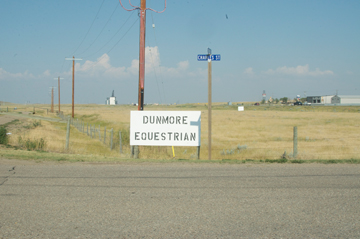 Dunmore’s Gasoline Alley structure plan is expected to be done by the end of spring this year and will give a vision of what a new businesses development will look like in the hamlet.
Cypress County hired WSP Canada this past August to help create a proactive planning document and help identify proper locations where that hamlet commercial and industrial growth within the plan area boundary says Jeffrey Dowling, county’s director of municipal services.
“It will also coincide when the time comes that there would be development interests or developers that would want to or be ready to develop various commercial businesses within the plan boundary,” said Dowling.
The plan boundary chosen was the north and south side of Highway 1 and extending east from the Eagle Butte Road and Charles Street intersection.
It actually extends somewhere in the neighbourhood of about 350 metres east of where Highway 41, Highway 1 and Township Road 120 all intersect,” he said.
“That’s the plan boundary area and it would be basically south of the CPR railway tracks.”
The plan itself would address the typical area structure plan aspects that cover utility servicing such as water, electricity, natural gas, transportation access, stormwater management and identify appropriate land uses that would be compatible with existing uses in the area.
“For example as I mentioned along Third Avenue there’s a number of businesses that are already established such as the South Country Co-op gas station, the Co-op Card cardlock fuel, the veterinarian clinic and some of those existing uses,” he said.
“We want to make sure whatever goes in is also going to be compatible with the surrounding area. That’s on the southside of the highway. Of course on the north side of the highway, that area is basically primarily just agriculture. Weir Construction has their shop and the Dunmore Equestrian Society has their existing outdoor arena facility that they utilize.”
The area structure plan was presented at an open house last November, where the public attended and the county gathered feedback.
“We’re at the stage where we’re reviewing a draft document that WSP Canada has prepared of the actual area structure plan,” said Dowling.
Dowling says by the end of spring there would be a document adopted by council and going forward existing landowners or future landowners would have the ability to utilize that document.
Once the final draft is complete, there will be an open house for the structure plan on Feb. 12, starting at 5 p.m., at Cypress County’s office in Dunmore.