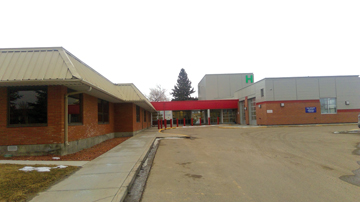 Commentator/Courier Freelance Photo by Samantha Johnson The Bow Island and District Stakeholders hope that AHS has heard their concerns about BIHC and its future.

While the Bow Island Health Centre (BIHC) was left off the list of rural hospitals to be closed in the recent Alberta Health Services review, it is believed that by a local group that the possibility of closure is not out of the realm of possibilities just yet.
There has been a concentrated effort by over 100 concerned taxpayers to address the urgent concern regarding the BIHC.
Round table discussions with AHS management, phone calls, letters,MLA meetings presentations to town council and the County of Forty Mile have been for the most part unsatisfactory.
Sheila Stearns, a member of the Bow Island Stakeholders group, says the group was surprised that in Bow Island and the surrounding districts who had no idea what was happening.
“Right now we’re on their radar. They have acknowledged we are fighting to keep our hospital,” she said.
“We need to keep it front and center so that a way larger group is having input and making themselves heard. There are stakeholders there every day, all day taking anecdotal notes and we will just keep re-submitting and showing that there is a need.”
Questions posed to Verna Yiu, AHS’s president and chief executive officer, included why is BIHC currently struggling financially with a skeleton staff as it was under local governance, and it was not that long ago that BIHC was provincially rated as the second most efficient hospital of its size.
Where are a majority of the funds- over one-quarter of a million dollars- going that were allocated to BIHC through a New Facility Grant after the completion of the hospital’s new emergency wing. Those funds were given to the Brooks hospital by AHS without notifying BIHC.
Also who was responsible for the change to our Emergency Medical Services, when was it deemed necessary by AHS to replace our highly trained, skilled and competent volunteers, who were committed to Bow Island and District with expensive, outside EMS Services.
Lastly, how can we express our concerns and be heard? How can we Bow Island and District Stakeholders, make a positive impact and promote BIHC to avoid the doors and services being closed?
Viu’s response back to the Stakeholder was “Your letter highlighted two current concerns related to staff morale and funding transfers between South Zone facilities.”
“ Focusing on staff morale, with the support of Gallup Inc., AHS conducted Our Peoples Surveys in both 2016 and 2019. Staff, physicians and volunteers were provided a confidential form to provide feedback. The survey results provided the organization and each team with objective data to enhance strengths and target areas of opportunity.
“The South Zone team did use the 2016 results to assist the Bow Island teams to focus on staff engagement, celebrate strengths and focus on opportunities. The 2019 data will be used in the same manner. As part of our ongoing commitment to employee engagement, our leaders continue to work with staff to understand how engagement can improve across AHS and at Bow Island specifically.”
Viu went on to say in regards to the funding and use of resources to operate BIHC and that she understands these questions were raised at meetings in the fall of 2018.
Stearn felt her response was “very vague.”
“We were expecting her to address more than the two issues that she did,” said Stearns.
“Like by saying the others have been addressed in 2018 is sort of a brush off . We know they were addressed in 2018 . We would have liked a more thorough response. The first one, (we’re) pleased she did acknowledge us and the second one was a bit disappointing, it wasn’t very thorough and basically she referred us to a bunch of people that we’ve already talked to.”
The Stakeholders are encouraging to “Please continue to fight for saving our BIHC and in support of our doctors , registered nurses, licensed practical nurses, home care, health care workers, lab techs, kitchen staff, cleaning staff and maintenance workers, patients, residents and clients in dire need of their services.”