Oosterhuis reels in Rookie of the Year award 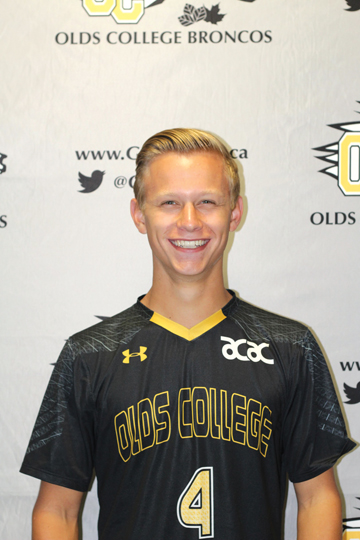 The Olds College Broncos awards night was held via social media between April 17-28.
Bow Island’s Garren Oosterhuis was a part of one of those social media mentions as he was the recipient of the Rookie of the Year award for men’s soccer.
“I think it’s great,” said Oosterhuis.
“It’s a great honour and responsibility for the team moving forward in the next years to kind of prove that anyone coming from a small town, it doesn’t matter what your background is, if you work hard good things really do happen.”
With a full season under his belt and winning this award,it meant a lot to him moving forward with his confidence.
“It’s a huge boost of confidence,” he said.
“It proves (to) me what I have been telling myself the whole time, that I do belong in this league and that I am an influential player throughout the league.”
He said the biggest improvement of his game was the mental aspect.
“I really learned to play smart and to work with my head and not my legs,” said Oosterhuis.
“I’ve always tried to run to solve all my problems. You’re looking at the plays and how they’re going to advance (and) what you’re going to next. You need to start thinking about (it) before it even happens, rather than just waiting for it to happen and then trying to catch up.”
He sees an upside to next year’s Broncos squad, despite losing some key pieces to the team.
“We will be losing a couple of key players, “ said the forward .
“One up front and one of our main defenders, the captain. But next year, we’re also bringing in a couple new rookies that look very promising.”
The team just missed the championships by one game.
Coach Niels Slotboom thought Oosterhuis displayed growth in his first year.
“In his rookie season, Garren showed growth in every game and became an important part of the men’s soccer team,” said Slotboom.
“In his rookie year he scored a total of three goals, while also adding to our program off the field, and maintaining a high GPA. I’m looking forward to seeing what Garren will accomplish in the seasons to come.”