Local golf clubs ready to swing into a new season 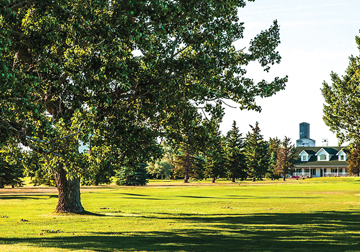 After Alberta Premier Jason Kenney’s April 30 announcement of the province’s re-launch strategy, which included golf courses opening, local clubs have been trying to organize the best they can to open for the season.

“A large portion of our staff is university students and I’m a university student as well. It was really unexpected, especially (since) how the government made it very sudden that golf courses were to open and on our part how to govern the golf course with the clubhouse not allowed to be opened.”

The initial plan was for the course to open up in mid-May and the clubhouse opening in June but that was moved up a couple of weeks to May 14 in Stage 1 of the province’s economic re-launch.

The course will be delivering scorecards and pencils to the players individually as well as food.

“We are doing a porch delivery service until we’re allowed to open,” said Hughson.

“We will be accepting green fees on the porch. But as of right now we’re not allowed to open the clubhouse. I’m just making sure all the measures are met in the clubhouse for sanitary reasons and for our opening date.”

She will obtain all of her staff back thanks to the government’s contribution to all student programs including the STEP (Summer Temporary Employment Program) and Canada Grant programs to cover the costs of paying her employees.

The course started by opening to members and it was this past weekend the public was able to golf at the village’s course.

“We’re just asking people to phone ahead and we’re monitoring who can enter the course,” said Hughson.

Hughson was asked about if the golf courses did not open and what it would have meant for the local community.

“It would have been a very big deficit to our town,” she said.

“Our local businesses are the grocery store (and) liquor store, in which we are alarge supporters (of). Our members are a larger supporter.”

As for the Bow Island Jubilee Golf Club, excitement was the feeling at the town’s 9-hole track when the announcement came that course could open up.

“We were definitely excited and at the same time got right to work to make sure we meet all the requirements and keep people safe,” said Nick Weisgerber, the club’s general manager.

“There was a lot of preparation we had to go through just so we follow all the guidelines and make sure we can stay open.”

He said the golf course had a heads up as to what the precautions would be, but as for opening, they found out like everybody else on the news.

Golfers will have to check-in through the window at the pro shop.

“It’s actually set up fairly well here, where people can just come up to the window and proceed right to the first tee,” he said.

Scorecards and pencils are prepared and given to golfers in a Ziploc bag.

Snacks and beverages will be available at check in and delivery on the course can be made upon request.

“As far as the restaurant, we’re still kind of waiting to see what that looks like, if we can do take-out services or what it’s going to look like once the restaurants open up,” said Weisgerber.

Weisgerber said the membership support has been “outstanding.”

“Even before the announcement we depend on membership revenue to get the season started and the support has been amazing,” he said.

The Commentator spoke to Golf Alberta last month as to what NAGA Alberta (National Allied Golf Association-Alberta) was negotiating with the provincial government on for golf courses to open.

Some of the guidelines off the list as follows: no use of ball washing stations throughout the course as well as the removal of all rakes from bunkers and play them as non-hazards, remove benches and no touching of the flag. Golfers must arrive no earlier than 15 minutes for their tee offs. One player per cart will be regulated, unless players reside together.

Clubhouse guidelines include restricting access to the pro shop, limiting access to facility staff and guests to ensure safe distances are clearly marked and enforced at all times. Other rules enforced include restricting access to the area except washrooms, which will be sanitized. Additionally, the frequency of routine cleaning with approved antimicrobial products, sanitization and disinfection of all locations, especially in common and high traffic areas will be implemented immediately.

A full list of restriction can be seen at https://s3.amazonaws.com/golfcanada/app/uploads/albertagolf/production/2020/05/01181120/NAGA-AB-Letter-May-1-2020final.pdf