Baba Cluck cuts the ribbon on a grand opening 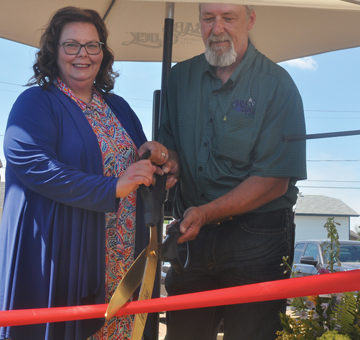 Commentator/Courier Photo by Justin Seward OFFICIALLY OPEN: Baba Cluck owners Lorelle and Dave Halderman cut the ribbon on the grand opening of the business on June 20.

Commentator/Courier
Redcliff’s Baba Cluck Comfort Eats has been open for a little over three months and finally held a grand opening on June 20.
“(We) just organized a day where we can celebrate finally after the three months of mayhem and one day we felt at a comfort level that we could do that and do it properly ” said
Lorelle Halderman, co-owner of the restaurant along with husband Dave.
“You know with Greg and Tim Herman playing music and all of our friends able to attend, we wouldn’t have done it without that, because and family are such an integral part of who we are and the support we’ve received.”
The restaurant opened in mid-March when the COVID-19 pandemic escalated and staff didn’t know how hard it was going to hit or the restraints on the spread.
“We were eight months into building this and it was too late. We knew at that point it was all systems go until there was a time where we felt at best to close for a couple of weeks for the safety of our staff and customers ,” she said.
She says they just kept going to navigate around the world health crisis.
“Our forecast and revenue stream is nowhere near what we had anticipated because of everything but we just have fantastic staff, that has been very flexible and getting through it,” she said.
Family is the backbone of the operation.
“I grew up in Saskatchewan, both Dave and I did. I come from a Ukrainian family and have very strong ethics with that in traditions,” she said.
“All of our recipes here were my Baba’s 100-year-old recipes or my own. Ninety-two per cent of everything of what we make is in-house. People are really starting to recognize that. People want down home food.”
While 70 per cent of customers are from Medicine Hat, there are people coming in from Ralston, Bow Island and Brooks.
“It’s become a regional attraction,” she said.
“We appreciate the fact that you have chosen Redcliff to start your dream,” said Mayor Dwight Kilpatrick.
“And we hope the residents of Redcliff come out and support you, as they have to many other unique businesses that Redcliff does have. We don’t get a lot of new businesses here. Most of the time it’s a lot easier to go where the bigger crowds are and unfortunately that is Medicine Hat. But the people that we do get here are usually very loyal.”