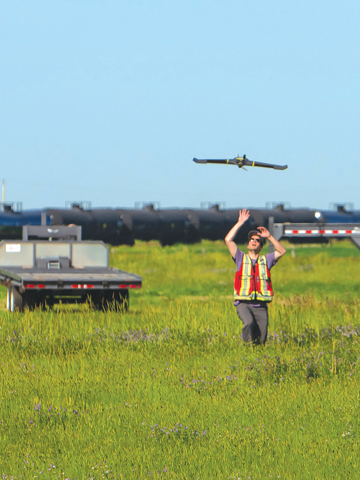 Photo submitted by Steve Donovan Aerium Analytics' eBee Plus coming in for a landing at the Foremosr UAS Range last week.

The Foremost UAS (Unmanned Aircraft System)Range had one of its Skysensus Project partners, Aerium Analytics, out at the range on Monday and Tuesday last week conducting topographical surveying of three areas in the village.
The three areas that were surveyed by an eBee Plus UAV (Unmanned Aircraft Vehicle) were the Foremost Golf Club, the cemetery and the 40-Mile Rail Inc. yard.
Typographic surveying is meant to gather data about the natural and man-made features of the land and its elevations.
It was at the request of the above-mentioned Foremost local stakeholders for Aerium Analytics to extend their operation to include those three areas.
“One of their (Aerium Analytics) milestones, (is that) they had to come out here (and) they did what they call an Extended Visual Line of Site (EVLOS), said Steve Donovan, UXS safety manager for the range.
“The cemetery for example, there is a 30-inch by 30-inch hand written (document) by pencil of all the gravesites. Two ladies in the Foremost village office, Kelly Calhoun and Marilyn Hirsche, with a 70 plus years mix between the two of them, they’re the local archival on that.”
Donovan says there was a gentleman that came out about year ago that did a land survey and the hope was to get more overlay on the area.
“Aerium Analytics came out here and did that,” he said.
“The eBee Plus, they’re authorized by Transport Canada, to actually fly over people. It’s sort of like a styrofoam material, so it’s negligible if it were to come in contact with a person. They did the golf club … it took them less than one hour to do that survey. Then they did the cemetery at the same time within that one-hour matrix. Larry Robinson, the general manager of 40 Mile Rail Inc., his interest is they have a brand new rail yard, but no survey typically done. So this again is a great base.”
The rail yard took 22 minutes on Tuesday.
The golf club will be looking at some additional information based on the base find and will be looked at through the data.
Items on the land they could be looking at adding to the base find are sprinkler heads throughout the fairways and greens, valve block covers, drainage covers.
The cemetery would be looking for more accuracy on gravesite locations.
Aerium Analytics was able to contribute to this base data at no charge to the village “It’s a fine, outstanding give back to the community out here,” he said.
“They’re always using the range out here. But it’s a recognition of what Foremost provides for them.”
The digital overlaying files were expected to be ready for each stakeholder in the coming weeks.
Matthew Holodinsky, project manager for Aerium Analytics says the ebee Plus is a fixed wing UAS and is meant to be used for making mapping deliverables.
“It’s about a meter-wide and a very common airframe used to do orthomosaic maps (an detailed, accurate photo representation of an area). It’s a delta wing (A triangle- shaped wing),” he said.
“ It has one payload (amount of weight a drone can carry) that could be attached to it. So we were using a RGB (camera) payload and the combination of that payload and the drone can produce some very good topographical maps.”
Holodinsky said “everything went great” at the Foremost range for the village and Aerium Analytics.
“The benefits that Aerium got of it is that we got to practice a mission in the EVLOS setting,” he said.
“We were able to confirm that our SOPs (Standard Operation Procedures) worked. We were able to gather all the data and safely complete 10 flights.”
The Skysensus project’s focus is to develop advancement and innovation of unmanned systems operations, airworthiness standards and training.
Furthermore, it’s an investment framework project under Innovation, Science and Economic Development (ISED), Canada’s Industrial and Technological Benefits policy for the research and development of EVLOS.
The range includes the project’s three small medium-sized businesses, UXS Consulting, Aerium Analytics, and Canadian UAVS.