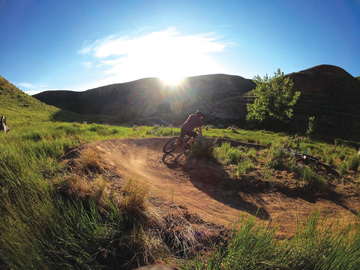 Photos submitted The 670 Mountain Bike Club has many scenic trails for cyclists of all levels in Redcliff.

Since the COVID-19 pandemic hit in March, it has caused a lot of shutdowns for recreation options in the area.
However, The 670 Collective Mountain Bike Club has seen extensive usage of its 60 kilometres of trail systems between Redcliff and Elkwater over the last few months.
“Obviously our riding season here in Medicine Hat is pretty unique because of the warm climate and typically our riding season can start some years as early as March, depending on what the snow (has done) this past winter,” said Allison Carroll, club president.
“We began seeing riders out by April. Now the Club wasn’t doing anything sanctioned. We weren’t promoting group rides or group events as per COVID-19 restrictions. But that certainly didn’t stop members from getting out and riding on their own or amongst their families, right with those cohorts that they were allowed to socialize with.”
Carroll didn’t get out on the trails until mid-May, but the feedback she had heard was that “trail usage was up tremendously by all people from walkers, bikers, joggers. Just multi-trail users out enjoying the Redcliff trails.”
She says the increases trail usage was due to people not being able to do anything else.
“It was pretty amazing to see people coming out and exploring our trails, probably many of them for the first time,” she said.
“From what I heard from our two local bike shops here (Cycle Path and Gravity Sports) in town was that buying a bike was near impossible by mid-May, early June. That also speaks to itself.”
There are also trails in Elkwater for people’s recreational needs.
“That area didn’t see any usage until early May. They have greater snow up there,” said Carroll.
She says the club is always trying to come up with ways to track the trail usage data.
“One of the ways we’re looking at doing is possibly encouraging riders to use the Trailforks app because that’ll show usage on the trails. If we kind of start promoting that to riders, that might give us some more accurate data,” she said.
She anticipates the trail riding traffic will continue into the summer.
“Yeah I think so,” said Carroll.
“I think what probably we’ve seen is because you can’t buy a bike anywhere almost in the city. A lot people are resorting I’ve heard to online sales, Kijiji, second hand. People have taken an interest.”
The Club just recently completed the finishing touches on a Redcliff trail.
“It was a long process, almost three years of behind-the-scenes work before the Club was able to put shovels in the ground. We were able to get a start on that trail last year,” she said.
“We were projected to finish Spring 2020. We’re kind of in the Summer 2020. Right now that area is called the Cemetery Region in Redcliff and it’s currently going under a naming process right now.”
Talks have commenced with the City of Medicine Hat to build new trails in Echo Dale.
The club has received clearance from Alberta Parks to head back down into Elkwater to do more work on trails.
“The Club currently has what we call down-hill line that is going and has been flagged out. That should be starting in the next month or so,” she said.
“We kind of have to go through some additional training, go through the different public health orders that are still in place with respect to trail building.”