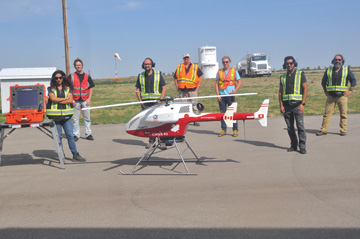 A group of chief UAV (unmanned aerial vehicles) pilots/research assistants from SAIT (Calgary’s Southern Alberta Institute of Technology) were at Foremost’s UAS BVLOS ( Range over the last couple weeks working with the Switzerland-based SDO50V2 SwissDrone.
The model is the first of its kind in North America as the SAIT program was able to bring the unmanned helicopter system that has a superior endurance and payload capacity over from Switzerland last year.
Its capabilities include flying for three hours on the turbo-jet engine, lifting 40 kilograms of payload and has several redundancy control systems to improve safety of an operation.
“This group at SAIT is the centre of innovation of unmanned systems,” said Shahab Moeini, co-founder of SAIT’s UAV lab in 2010 and operations manager.
“We call this a CIRUS (Centre for Innovation and Research in Unmanned Systems). “This is the first BVLOS (Beyond Visual Line Of Sight-drone operation outside the pilot’s normal visible range) for SAIT. During this operation we are doing BVLOS, which is only possible at Foremost right now all over Canada. We are testing the ground penetrating radar (GPR), which is the first one in North America that we brought in from Sweden. This is the first airborne ground penetrating radar. That will be mounted on that machine (SDO50V2) and we’ll operate that one.”
Moeini says the group was capturing the BVLOS data with the GPR, which can be used for the land mine detection project and detecting sub-surface items as well as pipeline integrity and geological mapping.
Additionally, an intelligence-based densitometer-a device used for measuring the density of material- was used for airborne seismic mapping.
The densitometer can be used for the oil and gas reserve well detection and then the seismic data can be uploaded to figure out the best location for the reserve well, he added.
“It’s a very new technology and was used by Eagle Canada (Seismic Services ULC),” he said
The $1 millon SD050D2 was used a couple months ago in a single operation with medical supplies delivery to the Stoney Nakoda First Nation and the affected remote communities.
“We did a mock version of taking a COVID test sample to the hospital and bring them medical stuff,” said Moeini.
“We picked up the medical supplies. It was like gloves and all those things in a package, bring it to Nakoda, they take that off, (and) they put the mock sample of the COVID kit test and we took it back with us. It was a mock version because of the safety of the crew.
The unmanned helicopter has also flown over a Imperial Oil-owned Kreal oil mine near the Firebag/Fort MacKay airport.
There have been frequent flyovers in Olds and along the Bow River for Alberta Environment too.
Moeini and four crew members went to Switzerland to train for one month and had another three weeks on top of that for the maintenance of the SDO50D2 SwissDrones
“One month training for the pilot and three weeks training for the maintenance,” he said.
The pilots received their advanced BVLOS and advanced helicopter certificate before coming back to Transport Canada to get a permit and license for the unmanned helicopter.
Moeini said “It a game changer for us because this machine is the only one in Canada and the US.”
“It’s open the horizon of a different experience. It’s worked perfectly, just some normal maintenance. It’s a unique experience for the SAIT graduates (to) come out, get the training in Switzerland of the most advanced UAVS in the world right now.”
The pilots come to the lab as students for their GIS (Geograhic Information Systems) Data Management or geomatics practicums, where they get their pilots license with the drones before going to Switzerland to get their training.
Now the students are hired at SAIT for this particular research.
“When we started flying the SwissDrone, it’s a big step up, “ said Gordon Wiebe, a drone pilot.
“It much more advanced. It’s much more evolved to fly, which I really enjoy. MY background is aviation. I have my private pilot’s license-fixed wing- and flying the SwissDrone is much more into that kind of flying. You have a checklist you go through that is extremely important to the safety of the flight. There’s pre-flight inspections (and) much more involved.”
The system features include: doing difficult missions under difficult or dangerous circumstances, cost effective compared to a manned compared to a manned IFR/night VFR (visual flight rules) airborne solution, has the capability to have a vertical takeoff and landing of that of a drone, feasible for cohort operations due to low noise emission, the emergency gear can be airlifted to inaccessible/ hazardous places, rapid deployment and has a 15-minute set-up system by two crew members.
The crew plans to return to Foremost in September and in the winter months.
Moeini confirmed there will be a part added on to divert heat on the turbine in the winter.