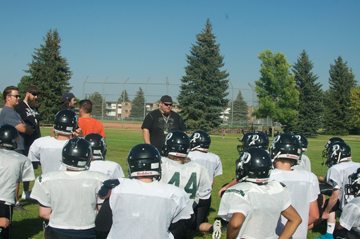 Commentator/Courier File Photo New Parkside Pythons coach Nathan Kobley runs drills during camp at Crescent Heights High School on Aug. 22, 2018. The Pythons will not be hitting the gridiron this fall due to COVID-19 restrictions.

Redcliff’s Parkside Pythons bantam football team will not be hitting the gridiron this fall.
Medicine Hat – Hawks and Colts – and Brooks also have teams in the league.
The local Rangeland Bantam Football Conference 2020 season was cancelled due to COVID-19 restrictions set out by the local school boards on Aug. 29.
“We were all ready to go until we found out that the school board won’t allow intra-school sports,” said Nathan Kobley, Pythons head coach.
“Our team is made up of kids from Crescent Heights (junior) High School, Parkside, Irvine and Seven Persons, and so we could not practice with all the kids. I’m not going to start practicing with Crescent Heights kids and leave out those other kids that are a part of the team.”
Kobley says it won’t be until Stage 3 before they can have practices.
“It’s hard because you’re disappointed because every year that one team has a group of kids that can win the league that year,” he said.
“We’re hoping by spring that we can get a season together. So maybe have a later season but all depends on how this back to school stuff goes.”
Kobley said, “It hurts because they lost that whole year,” on player development. “The mechanics won’t be there. All the little stuff,” he said.
The players’ psyche will change with the wiped-out season.
“I know several kids here that were very heart broken because football is where they shine,” he said.
“You’ve got the bigger kids who are big boys. They don’t shine by running and doing sprints. But you put them on the line and they get to push each other around. They’re happy then, they have a purpose … the friendships they make and the team aspect, the camaraderie, and is going to be missed.”