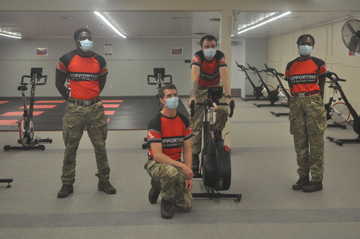 Four BATUS medical and dental personnel tesed their endurance and mental toughness in a 24-hour Cycle Challenge on Thursday and Friday of last week at CFB Suffield.
The participants included Maj. Tom Konarzewski, Cpl. Kwesi Nyalemegbe, Sgt. Mitchell Garton and Sgt. Andrene Love Sutherland.
Nyalemegbe came up with the idea after he started as a volunteer at the Medicine Hat and District Food Bank last month and in also speaking with colleagues.
“While we’re in the COVID period, we’re doing lots of exercise when we weren’t at work, and we’re keeping fit,” said Nyalmegbe.
“We thought why not use that to raise some money for the Medicine Hat food bank when I started work. I discussed it with my boss. He was happy with the idea. I spoke to another colleague of mine and he said ‘Yeah that sounds good.’ (And) lets split and do a charity event for one of the military charities and one for local charities.”
This is his second charity-related challenge for Nyalemegbe after he participated in an indoor soccer event in 2013, where players were playing three hours on and taking three hours off during a 24-hour stretch.
“This is where I got the idea of a 24-hour event,” he said.
“I’ve always wanted to do a charity event. This was a perfect opportunity with COVID happening and it being in the forefront of the news – how people were facing hardship. It just felt right that we did something for the community.”
A preparation schedule was set up prior to the challenge.
“All of us do quite of bit of exercise anyway. But we built up to it and then increased the amount of time we spent on the bike,” he said.
“We rode 90 kilometres last week back at camp. We have a little gym there, so we’ve been practising there.”
The participants will be riding 30 kilometres per cycle for one hour on a Wattbike and take three hours off.
The soldiers will have rode six sessions each by the end.
“We aim to do 180 kilometres each,” he said. “As a group we aim to ride a minimum of 720 kilometres.”
Sleep deprivation will be a challenge due to the three hours in between cycles.
“You might have an hour of sleep and then wake up,” he said. “But we’ve put (measures) in place to make sure that apart from sleep deprivation, we get electrolytes back in (and) good water supply.”
Cramping will also be an issue.
Konarzewski is the only dentist in the challenge and thought it was a great opportunity to get in some charity work.
“As I said before, I’ve been in BATUS for two years, and I’ve become very fond of the local community and Medicine Hat,” said Konarzewski.
“It was a really good opportunity to give something back to the community and help out with the Medicine Hat food bank. I’ll say I’m a real keen cyclist. I’ve done huge amounts of cycling, so for me it was no-brainer.”
He says it will be the mental battle that will make this a real challenge.
“In the military, certainly during training, but at many other times I think of, we’re kind of used to that environment where we get put in a position where we think we can’t go on any longer,” Konarzewski said of times where they’ve felt unable to battle through fatigue.
“My training has taught me that it’s a mental battle and you have to keep telling yourself (that) you can push yourself through it.”