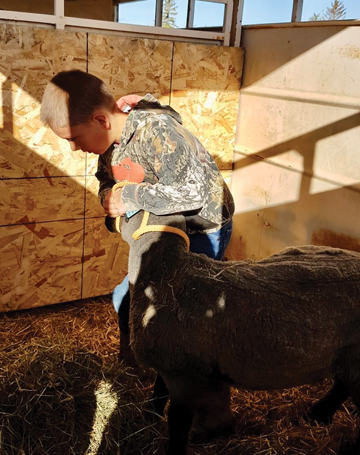 The North Forty Mile 4-H members have not been together for six months since the COVID-19 pandemic hit and the hope is the transition will be as normal as possible for the kids to start the new season on Oct. 1.

“So trying to maintain that physical distance and trying to do as many things outside as we can, is sort of what we’re thinking.”

Pahl’s hope is the kids can dive into their same projects as past years including the raising of a steer and sheep before taking the animals to market next June and their lawn mower building project.

“They kind of all are all so aware of it, being they have to worry about (COVID-19) it at school, that I don’t think it’s going be a huge stretch for them to physically distance at a meeting and distance as well when we’re out doing our activities.”

As a result of COVID-19 shutdown, the impact on kids’ Achievement Day was felt.

“Because the kids knew their regular Achievement Day was sort of ripped away from them, it was definitely hard to motivate them to finish their project, said Pahl.

“If they know right off the hop that there might not be a chance to put on their new jeans and show that lamb or that steer on the ring, they might be less motivated to train their animal. I think the parents will need try and find a way to keep encouraging their kids to work with their projects.”

Pahl would like to see the kids connect with each other again at the first few meetings.

“I just want to encourage them to be connected again and visit with their non-school kids again and get them back to socially visiting,” said Pahl.

“Usually throughout the year, we would get together with the club from Foremost and we would have a district event,” she said.

“At this point, those may not be happening because they don’t want kids to intermingle between the different communities. That’s one thing that may change, but we’re still waiting confirmation on that. I hoping in the next few weeks they can give us some guidelines about the district events.”

The club members usually work on public speaking speeches in January and February and details are uncertain at this point if that event will be a go.

North Forty Mile would compete against the Foremost club and then regionals would be after for the whole southern area.

“I’m thinking if things don’t slow down with COVID, then that will be changed to a more of a video speech, instead of all of being able to gather and do that,” she said.

The 4-H Club had a parent meeting on Sept. 29 at Bow Island’s town office meeting room.