Schaffer named Town of Redcliff’s Citizen of the Year 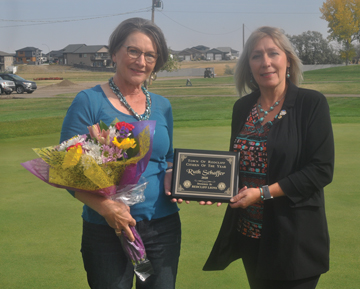 Commentator/Courier Photo by Justin Seward WELL DESERVED: The Town of Redcliff’s Citizen of the Year Ruth Schaffer (left) accepts her bouquet of flowers and plaque from town Coun. Shawna Gale at the Riverview Golf Club on Sept. 23.

Ruth Schaffer had to wait since the spring, but finally on Sept. 23 she was able to accept her 2020 Redcliff Lions Club sponsored Town of Redcliff Citizen of the Year Award in a small gathering at the Riverview Golf Club.
Schaffer would have received her award back in April at the annual volunteer recognition dinner, but due to COVID-19 that event was cancelled.
“It’s been a humbling experience to say the least and a total surprise,” said Schaffer.
She has been a Redcliff resident for 43 years and has volunteered on a few boards including baseball, softball, minor hockey and curling.
She also volunteeredfor the local chapters of the Diabetes Association and the Heart and Stroke Foundation, taught Sunday school at the Gordon Memorial United Church as well as serve on their board of directors.
She most recently joined the Riverview Golf Course as a volunteer in the office.
“I lent my administrative experience to golf club when things went awry in 2018,” she said.
“And there was no money for employees and we were in dire straits. I volunteered for them in an office role. They were getting things straightened out and here I am still volunteering.”
Schaffer’s background is in administration, as she worked for the Redcliff Town Police for five years, Parkside School for 23 years and the provincial government for five-and-a-half years.
She married her husband, Darrell, 41 years ago and she says the Schaffer family name has strong roots in Redcliff and she wanted to keep the name in the good books by volunteering.
“Whatever our kids got involved in, we volunteered by either coaching or doing the operations, whether it was on a board (or) just something natural,” said Schaffer.
She likes to get to know her fellow residents in order to start volunteering.
“Getting involved with volunteering in the community, means getting to know the residents. Those that have been here forever and those that are new to the community as well,” she said.
“It helps those that are new to fit in and getting a handle on how things have flown and where things can improve. I think the more long-term residents that keep their foot in the door, they can bring along the new comers and keep that spirit of pride going.”
Lions Club treasurer Terry Hurlbut nominated Schaffer.
“When they (the golf club) found out they had all the financial difficulties, and I know they elected a board of directors to run things, and I know they made a presentation to the town, I knew it wasn’t going to go well because I had worked for the town,” he said.
“When they did the second one, Darrell actually gave me a call, and I came in and met with him a couple of times and gave him my ideas as well. And all the times I was here, you could see what Ruth was doing. She was going back through the documents and finding out all the background information that they were going to need. The amount of hours that lady put in and the job she did is fabulous. I know there are other people that helped, but she was the spearhead.”