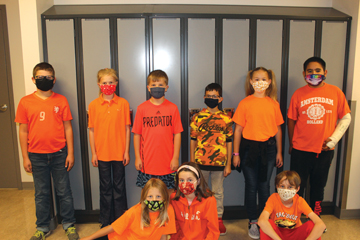 Orange Shirt Day is held on Sept. 30 every year and gives communities across Canada an opportunity to honor the indeginous children who were sent away to residential schools and their impacts. It’s also a day where survivors can reaffirm they matter as well as those that have been affected.
The day is in its seventh year and many schools were seen supporting the initiative by wearing their Orange Shirts.
Senator Gershaw was one of those schools and teacher Cory Schiebelbein spoke about how he teaches his Grade 7 Social Studies class about Orange Shirt Day.
“We wear the Orange Shirts to make it aware to the school population about what happened at residential schools and how there are still people in our Canadian society that are really affected by that. Like 10s of thousands of people went to those residential schools and are still alive ,”he said.
“This is a form of education- just to make people recognize that the residential school happened and some of the issues that went a long with that.”
Schiebelbein says with the day being more of school-wide event, it has more of an impact when the teachers show a video of why orange shirts are worn.
The Orange Shirt concept came into being after Phyllis Webstad told her story of her experience going to the Mission residential school for the 1973-1974 school year and upon her arrival, her clothes, including her orange shirt, were taken from her and she never understood why.
There was a lot of abuse at residential schools because there was not a balance from the government to make sure things were done a certain way, he added.
“It was a way to assimilate First Nations people,” he said.
“They weren’t allowed to speak their native languages, to have contact with parents and deal any sort of their culture traditions. They were forced to be Canadian-whatever the government thought Canadian meant at that point of time. And just how they didn’t respect the children and their cultures they were coming from, and that’s why the Orange Shirt is important.”
“It allowed me to show some to the Grade 7 class, teach the Canadian history, the whole school is involved and it’s just not a single class. It’s kind of all day, they see the Orange Shirt, they understand why they’re wearing them and it makes a bigger impact that way.”
A message that the students would like to learn from this day is to recognize is the possible idea of racism ideals out there and First Nations are quite often on the other end of it.
“It makes them more aware of their own actions and how they treat other people. That’s the hope anyways is that they recognize everyone has the right to feel safe and to belong to certain groups,” he said.
He says the event is more common now because in first couple of years Orange Shirt Day came out, it was not highly promoted.