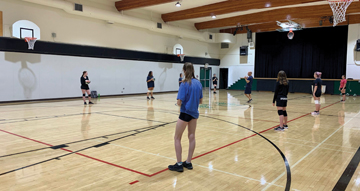 A sense of excitement has been felt as of late at Redcliff’s Parkside School, as young athletes have been able to return to play in cohort-style competition.
The Pythons have been able to field three female volleyball teams that will play in a cohort with Seven Persons and Irvine.
“We played our first game last night (Oct. 6) and its great the sports part is back in school because it adds a little more of normality for students at the junior high level,” said Boyd Craven, Parkside principal.
“The cohorts themselves- the students-they practice together. In past years, you could move between teams, they have floaters-that’s gone. Coaches could move between teams-that’s gone. You have one coach that sticks with each of those teams.”
As for referees, the school is looking at a volunteer for each of the games.
“In the ‘C’ (level), we’re just going to have the coaches kind of do their own refereeing for those games-like the Grade 7 level,” said Craven.
While games are being played, fans will not be allowed in the gym to cheer their kids on.
“There are differing numbers in each of the Grade 7, 8 and 9. But they have to have less than 50 people in the cohort combined, you can’t have more than four teams if let’s say there is 10 kids on a team,” he said.
“That’s been something that all the schools had to plan for. And without parents driving from Redcliff to Irvine, Irvine to Redcliff and Seven Persons and they’re not allowed to watch. One of the things we added last week was video and Zoom connections for the parents, so if they drive, at least they can sit outside and watch on their phones. We tried that for the first time last night and it worked out pretty good.”
A return-to-sport has been vital to a junior high athlete’s psyche.
“I think it’s huge with the junior high years,” he said.
“There is this part where they’re going mentally, emotionally, physically and sports is another outlet for kids. From a principal, teacher (and) parent’s perspective, it again during this time when school is not as normal as it normally would be, this has added something for the kids to be like ‘OK I’m excited about this.’ I know a lot of the kids, when we run around and talk to them, they were super excited about the whole process.”
Craven says the students are used to the safety protocols in the school throughout the day that there might not have to be as many reminders.
“When they come in, the dressing room is a certain way that they can go in, only a certain number of people,” he said.
“When they show up for games, they can’t just be mixing with other students. I think a lot of them are so used to that. I think a lot of them are just so thankful to be back in school.”
Craven added, “I’m excited that Prairie Rose School Division sports are back in school right now and that the parents, staff and students get the opportunity to experience a little bit of what sports in school are like.”