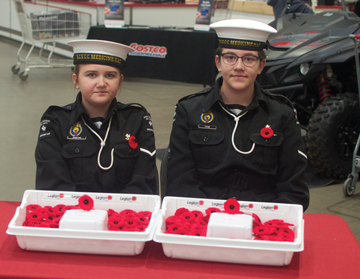 The Medicine Hat and Redcliff branches of the Royal Canadian Legion will be holding their annual Poppy Campaigns this year.
The organizations sell poppies at a number of Medicine Hat and Redcliff businesses to raise funds for veterans.
Poppy sales begin every year leading up to Remembrance Day, with many people wearing their poppy in the days leading up to Nov. 11.
Poppies can be purchased for a donation of any amount, while other goods like special masks will be for sale for a set cost.
Medicine Hat Legion president Sheila Donner says things will look similar and different when compared to previous years.
“We’re still going to be at Walmart, Canadian Tire and The Bay,” she said. “We’ve heard from a lot of merchants who are letting us put out poppy boxes in their stores.
“We’re happy to have a few tables set up this year to sell poppies.”
Other merchandise will also be for sale at tables with volunteers at them.
“We’re going to use tongs to pass out merchandise, and we’re going to have sanitizer for people to use,” said Donner. “For volunteers, we’re asking cohorts to sign up – people like a husband and wife or two close friends.
“We know it’s important to keep the campaign going, and we’re being as safe as we can with this.”
The Poppy Campaign will set up around the city at the end of the month.
Bracelets, pins and masks will be sold for a flat fee at the tables and at the Legion.
Redcliff Legion president Peter Devlin says the Poppy Campaign will also happen in Redcliff.
“It is absolutely happening,” he said. “We will have one or two places where we’ll have a table and people there to help out.
“We will be selling extra stuff this year, we’re just waiting on it.”
More information on where money from poppy sales goes can be found on http://www.legion.ca.