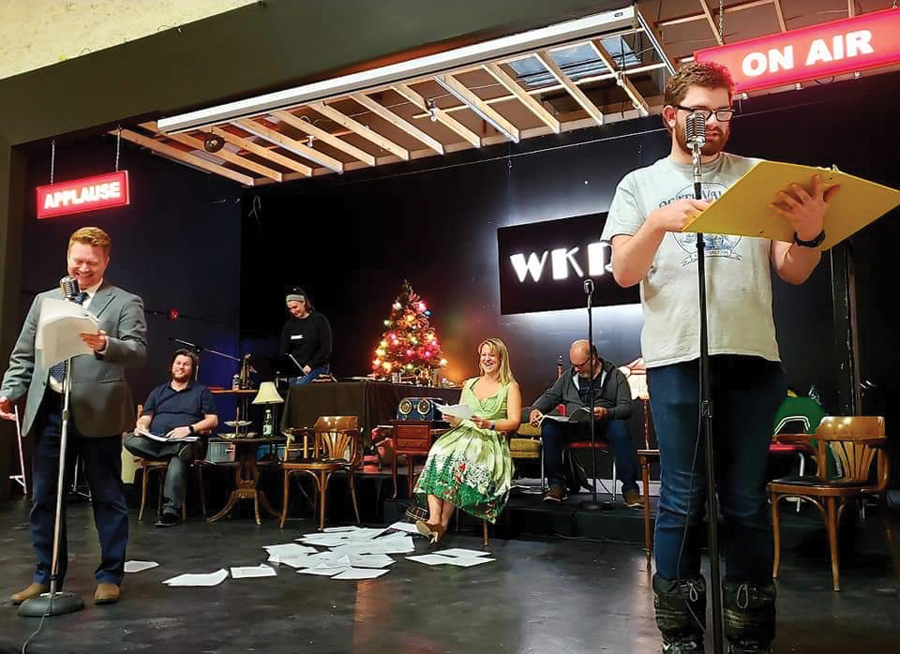 Photo submitted by Rob Berezay The Curtain Call of Milk River's cast for It's a Wonderful Life: A Radio Play.

Nine cast members have been working hard rehearsing for Curtain Call of Milk River’s It’s a Wonderful Life: A Live Radio Play performance that will be playing later in November.
The play is based off of the 1940s classic Holiday film that was adapted by Josh Landry.
The play will tell the story about an idealistic George Bailey, who considers ending his life one fateful Christmas Eve in 1946.
“This script is played out in front of the audience like a live 1940s rebroadcast,” said Curtain Call of Milk River director Rob Berezay.
“In other words the cast are all up on stage-which is set in a Christmas setting of a radio theatre- and the actors are reading the story, and they’re not really acting persay ,they’re voice acting. But the fun thing about it is there are only nine actors doing 30 something-odd different characters. Each character on stage is doing multiple voices.”
Berezay says foley artists do 99 per cent of the sound effects.
“They’re all manual sound effects,” he said.
“There’s dozens and dozens of sound effects: walking and crushing through the ice, splashing through the water-all those things are done manually by three different people.”
Berezay added there are 16 different people who are required to put this play on.
It’s a Wonderful Life: A Live Radio Play plays from Nov. 19-21 at 7 p.m. at the Milk River Civic Centre.
Tickets are $20 and can be purchased at Smart Alice in Milk River or by calling Berezay at (403)421-0227.
There is a limit of 100 tickets available each night due to COVID.
Cohort tables will also be available for purchase.
Locally, the Foremost Theatrical Society decided not to do their annual November show because the committee could not see the full package dinner theatre being offered at the Community Hall safely amid the COVID-19 pandemic.