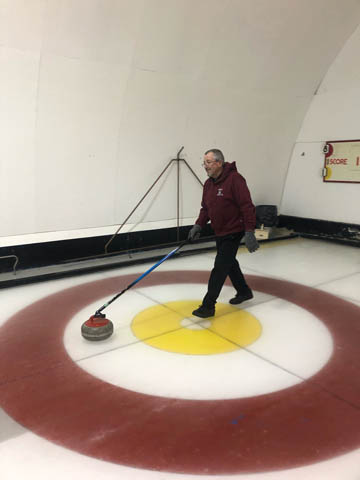 MEASURING THE SHOT: Gary Soucey finishes his shot in the house last week at the Redcliff Curling Club.

Redcliff Curling Club members will walk onto the sheets of ice to a slightly different format for games amid the COVID-19 pandemic this week.
Games will see only the one sweeper protocol, which is a Alberta Curling guideline.
“That one sweeper has to sweep the rock all the way down,” said Linda Asham, Club president.
“The opposition team can’t sweep at all-normally the opposition would be able to sweep behind the T line and swep the rock out- just to keep people out of the houses.”
Sanitizers will be all around the curling rink, masking is optional and teams can play as cohorts if they choose to and theycan together or not.
She does not think these rules will impact the players as much.
“It shouldn’t affect us too much,” said Asham.
“We’re going to operate our open league on Tuesdays and Thursday nights and our ladies league onWednesday nights. But we don’t have enough this year for a men’s league. We’re down a little bit, but being the small club we are, we were quite concerned that if we didn’t open this year, we would have a hard time opening the following year.”
The RCC is down three teams this year, bringing the numbers down to eight in the open league and 6 in the ladies league, she added.
Games will have staggered start times with 10 minutes in between just to reduce the amount of people in the lobby and locker rooms.
The junior curling program will start Nov. 18 and registrations are still being accepted up to 20 players.
The time is 4 p.m. every Wednesday and the cost is $25.
Interested junior curlers can contact Deb Aadland at (403) 878-6993 to register.
“We’re accepting more people, even if the season has already started,” said Asham.
“If anyone is interested in trying it out, they can give us a call.”
There will be no bonspiels this year.