Last of the Redcliff War Brides 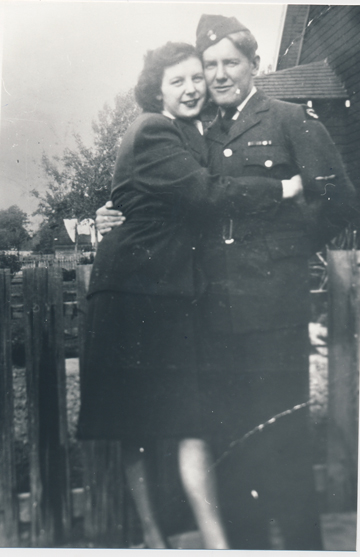 Over the years, Redcliff has its share of veterans from World War One, Two and Korea, numbering in the hundreds.
The Redcliff Legion walls display both names and pictures of the 1939 to 1945 Second World War veterans. The wall of pictures was compiled by Buzz and Murial Ozgood several years ago.
A few of the returning soldiers brought wives from Europe home with them. The Redcliff “War Brides” as they are known, and the names are as is: Doreen Byam, Margaret Blades, Isabel Goodine and Rene Eremenko.
Aside from Isabel Goodine, I got to know the others personally and got to hear some of their stories, relating to being a War Bride.
I had written previously about Byam and Eremenko. This time I’d like to about Blades, the last of the Redcliff War Brides. I had shoveled snow for Margaret for many years now and when I would finish the job, I would got into the house and have a brief visit.
The visits would include current events and how everyone is doing and history. The history part is always important to me.
Margret was born in Christchurch, Eng.
At age 14, she moved to Warrington to live with an aunt where she got a job in a grocery store, then went back Christchurch to work in a hotel. One evening Margaret went to a movie, there was a Canadian Air man sitting behind her. He later introduced himself at a bus stop and asked her out.
This airman was George Blades.
He had been born in England and came to Canada in 1929 when he was two-years-old. His parents farmed at Vermilion, Alta. George and Margaret only a few months. Prior to their wedding on June 5,1945, they went to visit for their honeymoon.
In April 1946, Margaret sailed for Canada and landed at Pier 21 in Nova Scotia and from there took the train to Medicine Hat.
Margaret arrived ahead of George and was met at the station by George’s parents.
George and Margaret moved to Redcliff in 1948, they both had jobs at Dominion Glass –Margaret in the ACL and George as a welder in the mould room- and they had three girls.
George died in 1979 after 34 years of marriage.
Margaret has been a long-time member of the Gordon Memorial United Church. I do remember some of our conversations involved her affection for the Royal Family. She saved and proudly displayed a few Royalty souvenirs. I also would talk about her favourite singer Vera Lynn, who passed away last yearat age 103.
I feel one of her greatest accomplishments at age 92 is be able to still be at home and have reasonably good health. Due to health problems on my part, last winter I couldn’t shovel her snow and so I missed our visits.
One last note, Margaret was a member of the United Church evening circle, the Legion Ladies Auxiliary and had been a Girl Guide leader. Margaret and George were also members of the Redcliff Golf Club.